I randomly suffered a bout of excruciating back pain at work today.  It only lasted 10 minutes before beginning to dissipate, but it was unbelievably severe.  I’ve never felt anything like it.  I decided to come home, and I’m lying down now.  Fortunately, it has not recurred.  It was so weird.  One minute, I’m standing at one of my two daily stand-up meetings, and the next I just had horrible back pain in my lower back.  It wasn’t a spasm but felt like muscle pain.  It was really weird and kind of scary.  I feel like I just can’t depend on my body at all when I’m pregnant.   When we were in Hawaii, I was reluctant to snorkel because all the snorkeling was out pretty far, and I was afraid something weird – exactly like this – would happen.  Unlike on our previous trip, I had to go out alone because B had to watch L.  I did end up snorkeling, but very little.   Anyway, B is heading out of town tonight, and I’m feeling very alone.

Another month, another knitting project.  I didn’t knit a lick while I was sick with nausea, which is a pity because I spent a lot of time in bed doing nothing.  I just didn’t feel up to it.  I’m feeling much better these days, though, and the knitting must resume.  It seems like everyone is having babies, and I have my own baby to knit for, and L has been asking me to knit her a blue dress for ages.

I started with knitting for N.  Originally, I was going to make her this hat:

However, I was too lazy to swatch, and it turned out bigger than expected.  Also, L really liked it, so I decided to just give it to her.  She has actually been wearing it a lot, and I do think it’s adorable on her.

I wanted to do something a little special for N, anyway, more special than a hat.  I ended up making her a lace sleepsack: 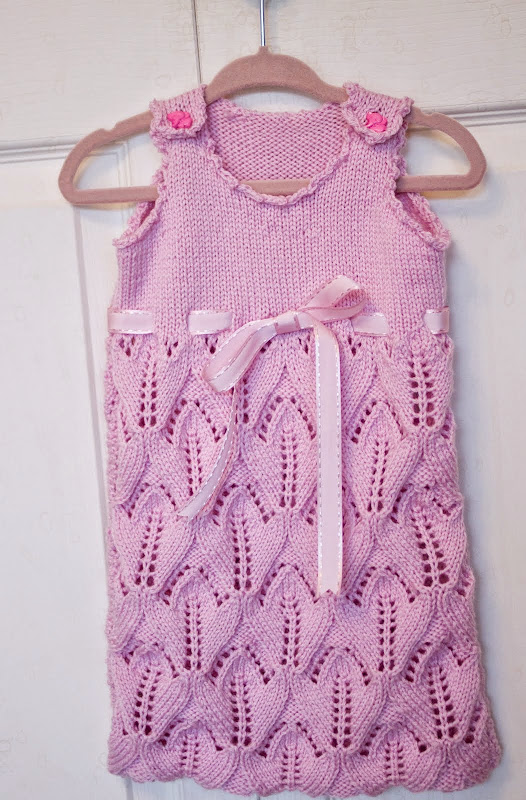 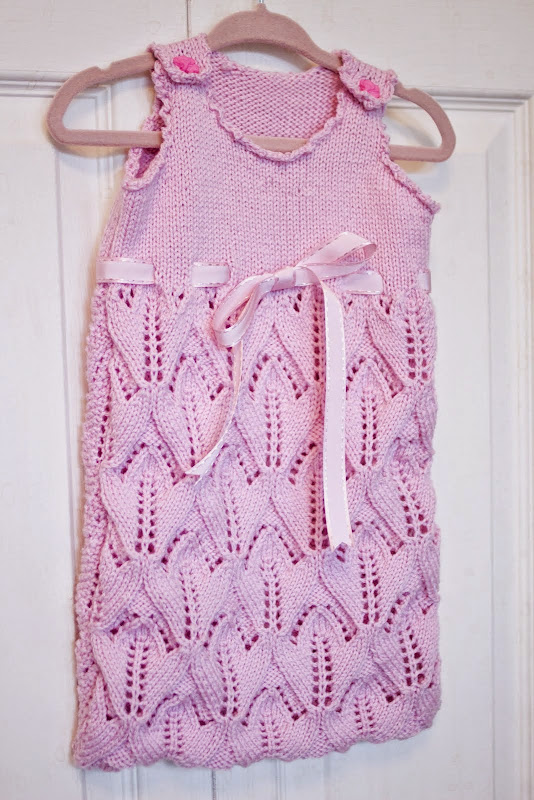 The pattern was nearly identical on the back and the front.  I made several mistakes on the back, which I did first, but got it right on the front.  I figure the front is what people actually see, so it’s all good. 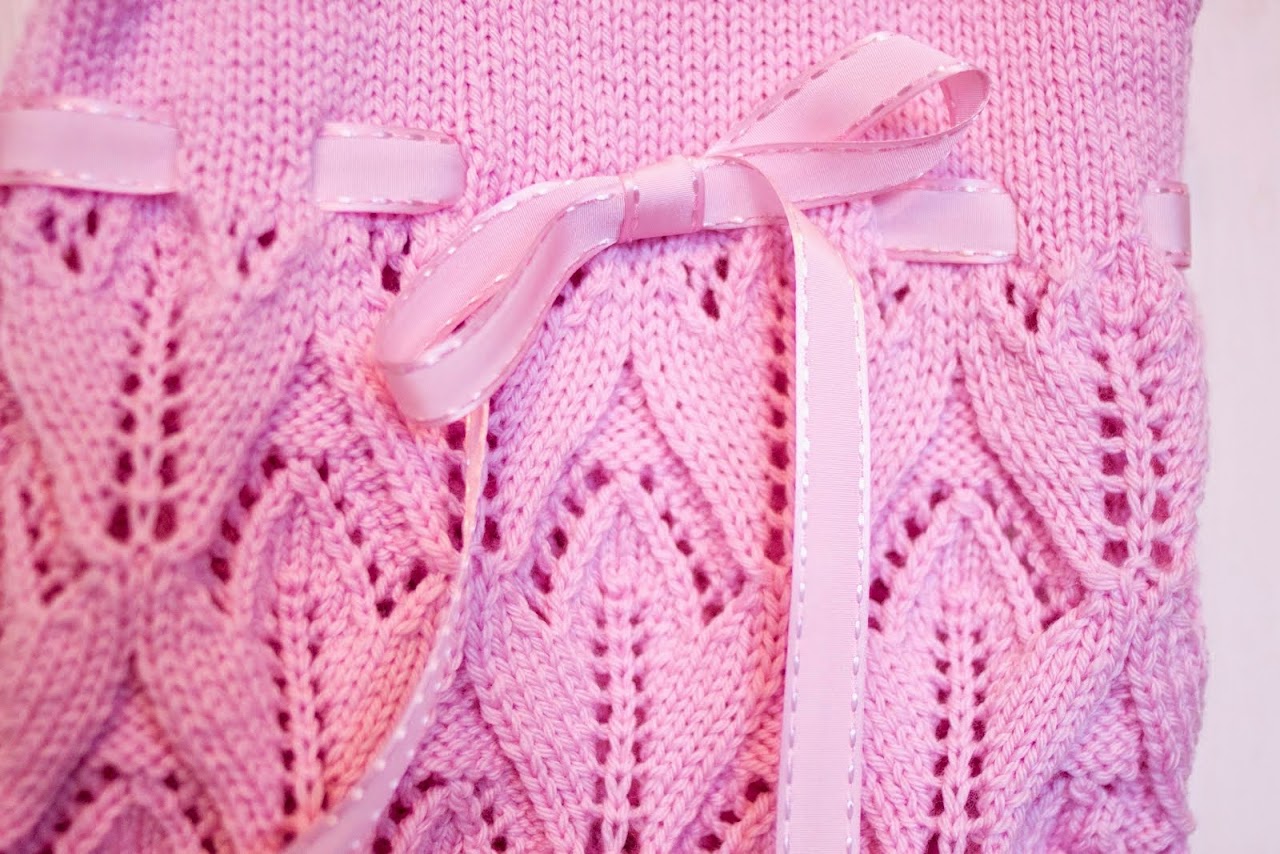 After knitting, the next step is blocking.  This is usually important, but it’s especially important when knitting lace.  You can see what blocking looks like below: 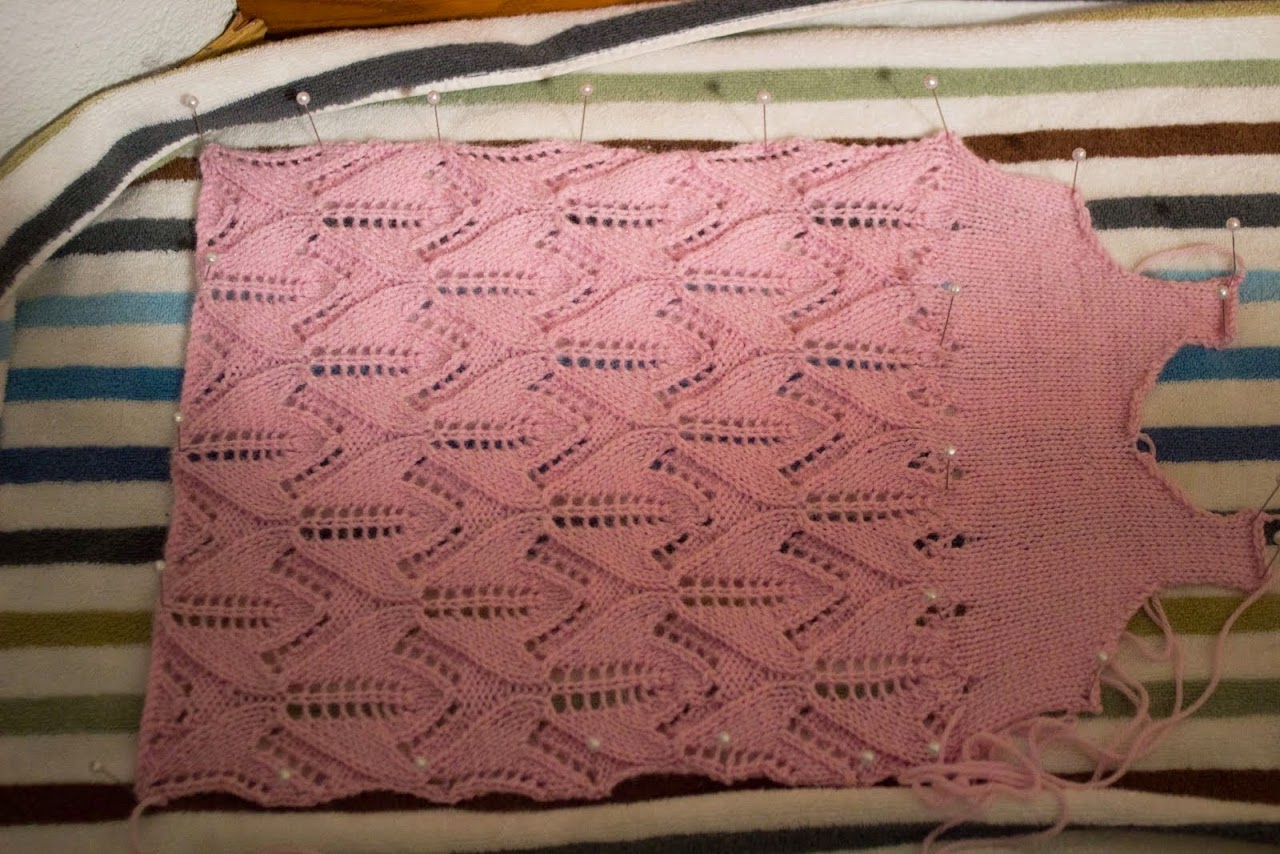 I still had two more babies to knit for, so I picked out a little sailor dress for my next project.  I ended up getting pretty sick of this one . I was happy but not overjoyed by how it turned out. 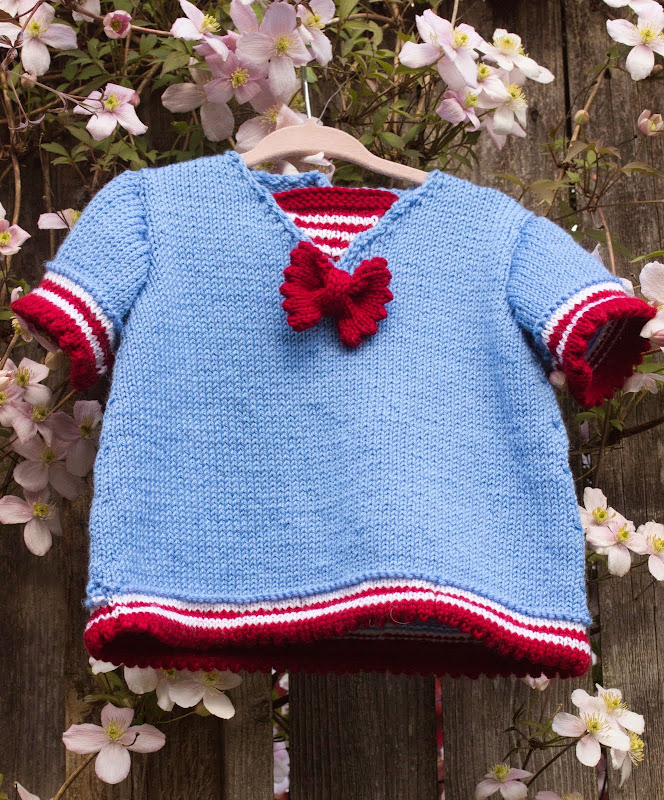 The finishing was a huge pain.  So many pieces to knit together, so many loose ends to sew in.  The project called for a crochet border.  Have I mentioned that I hate crochet?  I’m not very good at it, and I do it extremely infrequently, so it’s always annoying when it’s called for.

One of my favorite parts of the dress was the ladybug buttons I found for the back: 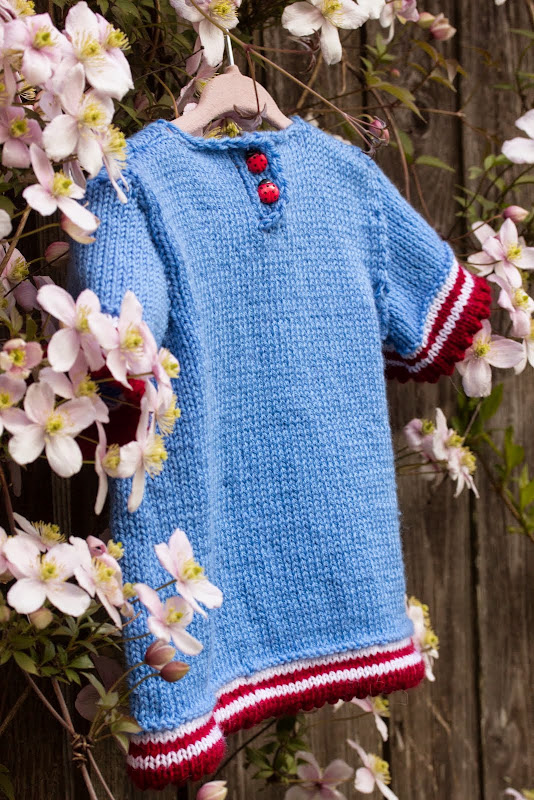 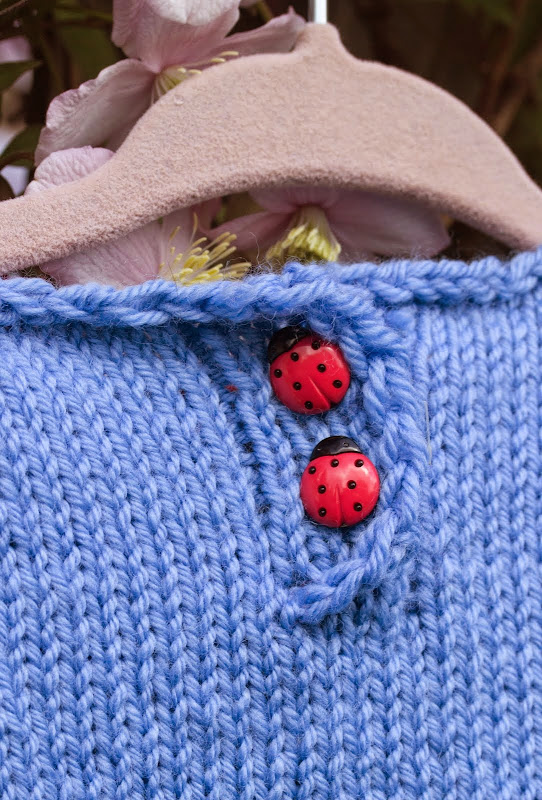 All’s well that ends well, I guess, and I’m glad to be moving on to a new project. 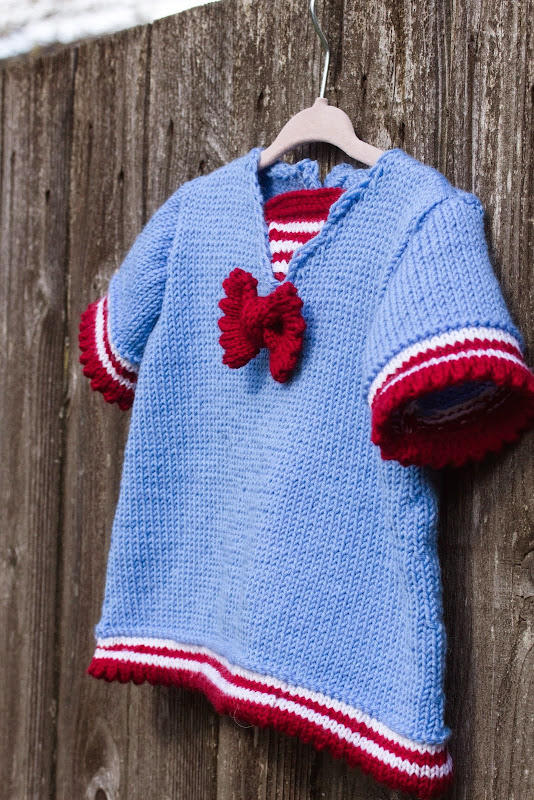 I’m planning to finally make L that blue dress she’s been asking for.  Below is a swatch (for gauge) using the yarn I picked out: 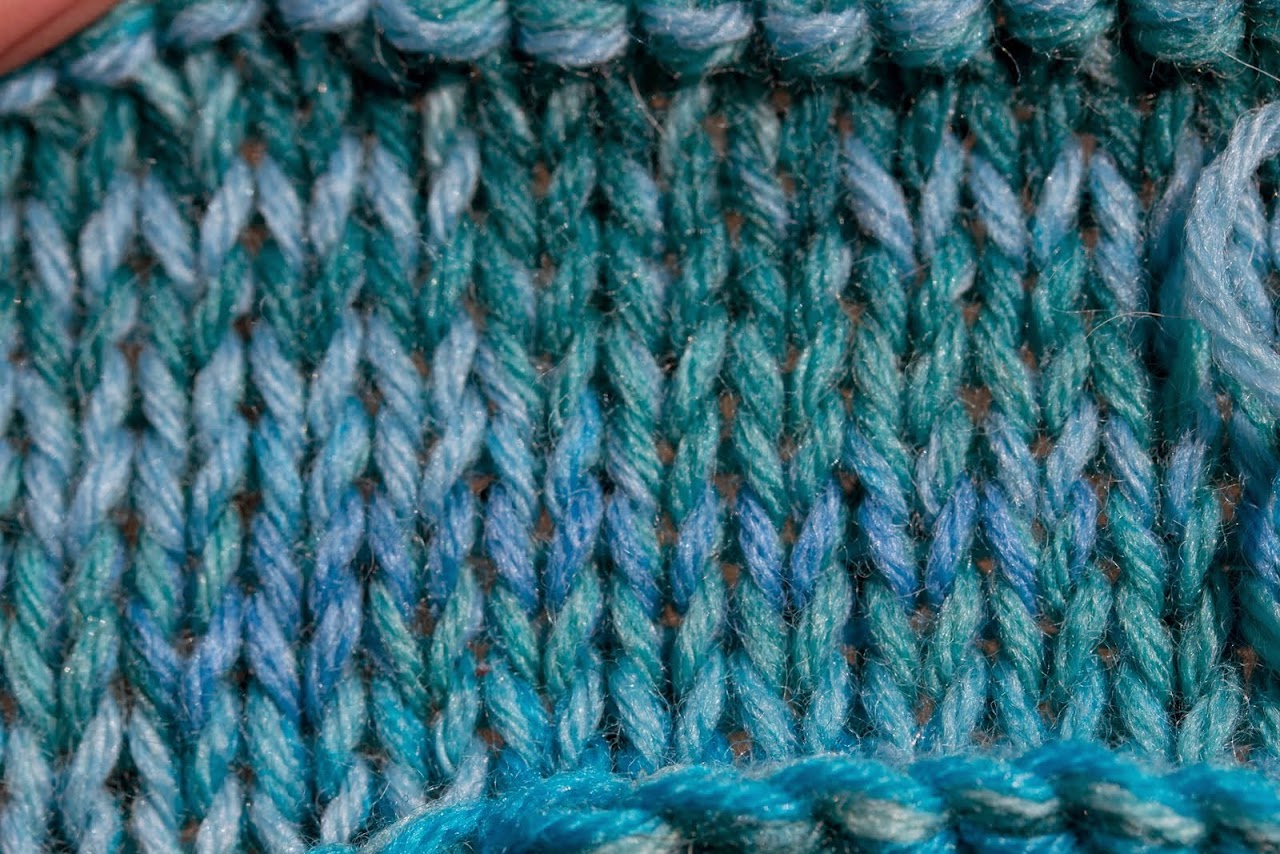 Well, I am about 21.5 weeks.  It seems fitting I should start by blogging about pregnancy, because it really does dominate my life.  There are women about there who blithely continue about their life while pregnant, but I am clearly not one of them.  I’ll feeling not bad.  Heartburn comes and goes, but while I’ve had a couple bad evenings, the last few days have been good.  Pelvic pain is hear to stay, just like last pregnancy.  It’s worse this pregnancy, which I think is typical – for it to get worse with successive pregnancies.  It kind of scares me, how bad it is already, so I mostly try not to think about it which is hard at times.   I’ve start water aerobics at the local hospital, which I do think helps.  I am also swimming once a week.  I can barely pack myself into my bathing suit and don’t feel like working out in a bikini, so I did enjoy ordering a new suit in literally the largest size on offer.  Hopefully it won’t be too big.

Oh, and it’s a girl!  Hurray.  I feel some sadness that I’ll never have a son, but mostly, I’m just excited.  She is kicking up a storm, much more so than L ever did.

My sister was recently promoted to VP of product at her company.  To attempt to put this in perspective, she was leap-frogged over many more qualified, older candidates.  It’s the type of position that must be approved by the board of her company, which includes people like the CFO of Face.book.  In short, it’s a huge career opportunity for her.  Given that my own career is dying a slow and painful languishing death, I’m attempting to enjoy living vicariously through her.  She has had personal and health struggles in her life, but in some ways, not meeting the right guy has allowed her to really excel professionally.  She can travel wherever, whenever without having to consider anyone else.  She can move wherever, whenever.  I don’t want that, but I’m glad that it’s at least had some benefits for her.  Of course, I think her success has more to do with the fact that she is just really ridiculously good at what she does.  I’m excited for her.  She’s nervous because the last guy who had the job was fired.  It’s high pressure for sure.

On another note, I stumbled on these unbelievable quilts on Etsy: 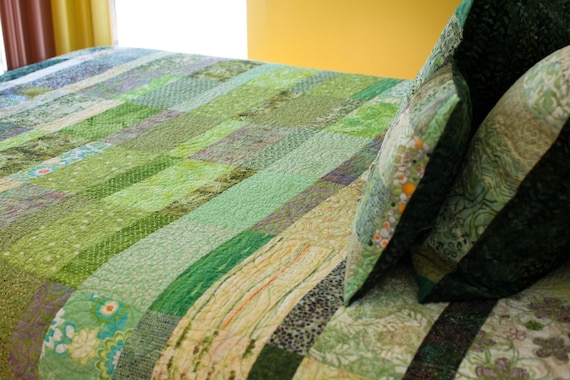 There are several, all stunning, by the same shop owner.  They are also stunningly expensive, though as a knitter, I have no doubt that the price is completely justified by the hours and material costs that goes into them.   Still, a $900 quilt for my bed is not really in the budget right now.  Maybe a pillow cover. Either way, I’m really inspired by these.

B fixed our washer, so thankfully washing machine procurement is indefinitely on hold.  I thought it was really interesting that Karen said her front-loader saves her $20 / month on her water bill.  Our water bill is about $30 per month total.  That’s two showers plus a generous bath daily, plenty of laundry, lots of water used for cooking, cleaning, bathroom, etc.  Our house is occupied by 3 people close to 24 hours a day.  Anyway, it’s hard to imagine that even if a more efficient washer reduced our laundry water usage to zero that it would save us more than $5 per month.

Friends sent us a baby announcement today, and the photo featured the baby blanket I’d knit for them.  This pleased me ridiculously.  Sometimes it’s the little things.  Here’s the blanket: 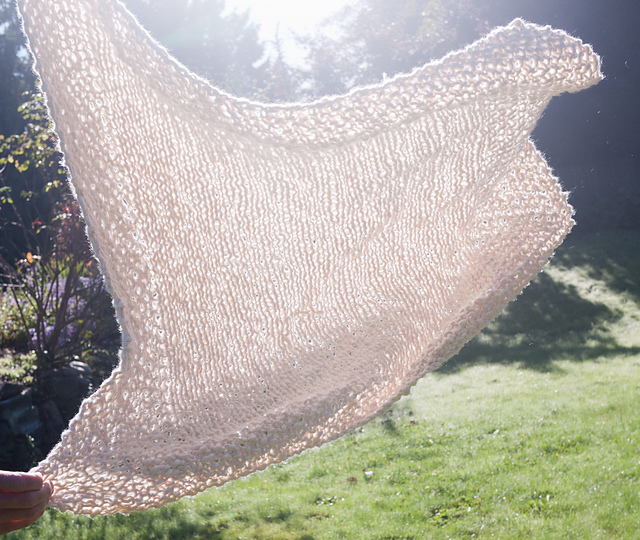 We find out the gender of the baby tomorrow.  I’m not too happy that the ultrasound is on Good Friday.  It just feels like a bad day to have an anatomy scan.  I obviously did not realize when I scheduled it a couple of months ago, and at this point it’s way too late to re-scheduled, so I’m trying not to be superstitious, if that’s the right word.

On the day of our departure to Hawaii (last Wednesday) our washing machine gave out.  The failure mode was flooding our living room floor.  We were delighted, as you can imagine.  In any event, we are considering whether to replace it or whether to buy a new one, and if we buy a new one, whether to buy a top-loader or a front-loader.  Our current washer is probably 90s vintage and is a top-loader.  We’ve had no problems with it whatsoever.  My experience with front-loaders is limited to Ireland, where front-loaders have always been used.  They did not work as well, in my experience, as top-loaders.  However, I’m willing to believe some progress has been made in washer technology in the last 10 or 20 years.  Does anyone have any input or suggestions regarding washing machines?

Well, once again, we didn’t get the house.  Apparently, it came down to us and another buyer (there were only 3 offers total), and the other buyer was paying cash.  It’s hard to compete with that.  B and I are not in a position where we can put down 740K in cash.  This happened to me before, when I was buying my first house.  I actually had the highest offer on one house, but they sold it to another buyer who was paying cash.  *sigh*  Back to the drawing board.