It seems like whenever I find a sports bra I like, it ends up becoming unavailable.  With pregnancy, the problem became a bit more pressing, so I ended up ordering a bunch of bras.  When I was younger and skinnier, I was an A cup, and I could wear basically any old sports bra worth its name.  I liked the champion ones you could buy for $20 on Amazon.  I put on some weight and became a B-cup, and needed a more supportive bra, but most moderately supportive bras worked for me.  Pregnancy and breastfeeding is a different story.  I’ve taken the two-bra route for breastfeeding in past, but it’s uncomfortable and not my favorite.

Currently, there are two bras that work for me:

LuLuLemon Pace Perfect Bra – available only at $100 on eBay

This one is awesome because it has a handy back pocket for my phone.  Love it!  But not enough to pay $100 on eBay.  I think.

Since neither of these was available, I ordered a bunch to try:

Brooks Juno Crossback – This is a super popular bra, but I’ve always been un-enthused about a bra with hooks for working out.  In the end, it was just tight and uncomfortable and unflattering.  Maybe I just needed a bigger size.

Nike Indy Hyper Femme – I honestly thought this one was cute, but it looked horrible on and just didn’t provide anywhere near enough support.  I think it’s more of a bra to look good than functional.

Oiselle Bra-Zen Bra.  This one was too stretchy and didn’t provide enough support.  I own an Oiselle bra, and it’s also not sufficient supportive when I’m pregnant.  It’s fine otherwise, but it won’t work now.

Lululemon Zip Front Enlite Bra.  I actually really like this one.  It was comfortable, easy to get, and supportive.  It comes in true bra sizes instead of just Sm, M, L.  However, unfortunately, I think I’d need to size up the band for pregnancy, and then it wouldn’t fit afterwards, and this is a $100 bra.  If I was desperate, I’d pay, but I’m not, so I’ll pass on this one for now.  I think this one is a good option for more busty women, a category I don’t normally fit into.  I’m just a tourist. 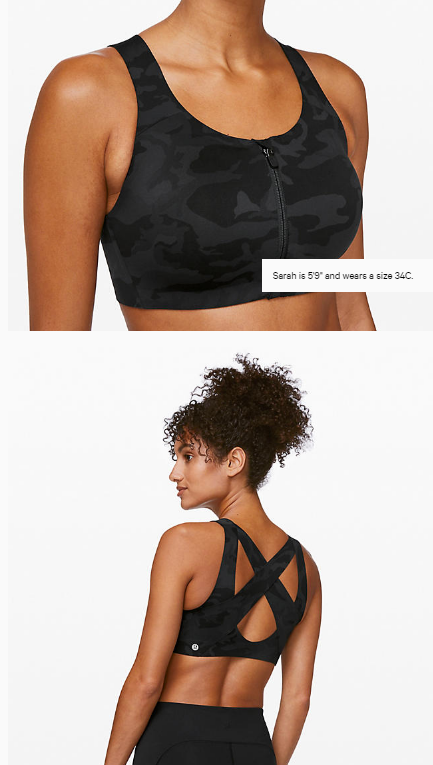 Lululemon Energy Bra – This ended up being the one I decided to keep.  I love the floral pattern.  It’s supportive, not too hard to get on, and was reasonably comfortable.  While I liked the Enlite Bra a little more, this one is more forgiving (and less supportive as a result) and should fit fine after pregnancy, too, so I don’t mind paying $50 for it.  It ran in it yesterday, and it provided enough support for comfort.

The Dems seem to be having a contest to see who can be the most liberal.  Honestly, I think they are going to lose to Trump, which is really impressive.  It’s as if Obama had lost of McCain.  That election should have been a landslide given the vast dissatisfaction with Bush, and it was.  Once again, I would say the majority of the country is deeply dissatisfied with with Trump.  But that doesn’t mean we want, for example, to completely eliminate private healthcare.  (I think that’s extremely  unlikely to happen, anyway, given that many or most of the vaunted European countries actually have some degree of private healthcare alongside the public system.)  The extreme positions that Dems are trying to outdo each other with honestly could result in a second Trump term.  There is no Obama running.  Heck, I don’t even see a Hillary running.  (Warren, needless to say, is no Hillary.)

I am mildly amused that Jay Insley, a Washingtonian who you may not have heard of running for president, got the least airtime of all the candidates.  He held up funding to repair a dam that was threatening both my house and my place of work over some pet project of his, and I will never, ever vote for him.  I was kind of hoping he’d see some measure of success in this election, just enough to get him out of our hair here in WA.  He’s obsessed with climate change, which is totally legit, but even in my state, a veritable bastion of liberalism, has managed to do exactly zilch in terms of enacting relevant legislation.

From the Post, however, this is an interesting question:

L had her first swim meet last night.  (She’d previously had a practice swim meet with her team only.)  The whole event went fine.  I’ve noticed in general, swimming doesn’t seem as big or as popular in Seattle as in SW Virginia, despite the much larger population.  Why?  Well, last night’s meet was a case in point.  It was in the 50s and drizzling on and off.  Seriously, folks.  Does weather in the 50s make you want to go swimming outdoors?  The pool is heated, so it’s not that big of a deal, but the kids spend a fair amount of time standing around shivering in their suits.  We’d brought a towel and sweats for L, but it was not enough.  She was frozen, and so were the rest of us by the time we got home.

Oh well.  Life in the Pacific NW has its ups and downs.  It’s definitely different!  We all woke up freezing this morning since we haven’t been running the heat and the temperature dropped below 50 last night.  We finally gave in and turned on the heat for a couple hours.

16.5 weeks and still nauseous.  I threw up yesterday, which is certainly about as late as I have ever thrown up during pregnancy.  I am just exhausted by it.  Surely this will end, right?  I dared drink about a third of a coke this evening, and I think that’s why I’m feeling particularly lousy right now.  Sugar just does not agree with me lately, and I was in Spokane on business the last couple days, and ate a lot of fried and sugary food and am now paying the price.  It was hard.  So. Hard.  Traveling for work while feeling like this.

I’m feeling the baby.  It’s nice.  Definitely the best part of pregnancy.  Though B patting my tummy is also very cute.  Sometimes she gets confused about where the baby is . . . my breasts?  Upper belly?  But I think she’s got it down now.  She’s so excited about being a big sister.  L is decidedly less enthused but seems neutral more than sad, so I’ll take it.  I think she’s kind of excited but also knows that little siblings are a mixed bag.  Even though B is unquestionably one of the best things in L’s life.  L loves her so much even if she gets annoyed.

I was trying to think if I had any other friends that “voluntarily” had three kids.  I have male friends from work with three, but I’m getting stuck thinking of women.  Pretty much all of my close women friends have stopped at two.  Obviously, I have acquaintances who’ve had three.  But close friends?  No.

Something about pregnancy announcements featuring couples canoodling each other gets to me.  I mean, it’s like, we understand that you are having sex and that you are hot for each other and that the magic of man and woman created new life.  I don’t feel this way about wedding announcements or engagements at all – it’s specifically the pregnancy announcements.  I don’t know what it is, but a lot of them are just so ick.  I think there’s something to be said for the old-style thing where you weren’t allowed to acknowledge that a woman is pregnant.  In fairness, that’s the approach many of my co-workers have taken.  I am also very ambivalent about photographing pregnancy tests.  I mean, that thing has your urine on it.  Gross!

Baby and I are 15 weeks along.  It actually surprised me to read that the little one is 2.5 ounces.  That’s not nothing.  The fruit comparisons are another thing that bug me, but this week’s comparison is to a navel orange.  Navel oranges weigh a heck of a lot more than 2.5 ounces.  I think the low density of fetuses at this stage is interesting.

I, meanwhile, am putting on weight like it’s my job.  I am hungry all. the. time.  Also still nauseous sometimes and doing more than my share of gagging and retching, but overall feeling better.  Sadly, I sat next to someone with a case of the bubonic plague at L’s dance recital, and I’m pretty sure I’m coming down with it.  I mean, I’m definitely coming down with something, but whether it’s the apparently life-threatening illness she had is TBD.  In hindsight, I think I should have asked for another seat.  Being sick while pregnant is just not cool.