I’ve picked up my knitting again.  St. Brigid is a bucket list knit, and I knew it was going to take forever . . . and it is living up to billing.  It’s not really particularly hard, but the pattern is sufficiently complex that I haven’t been able to memorize it, which means knitting it always requires a certain amount of concentration.  In any case, the back is done (one mistake, which I think is not noticeable to the layman), and I’m determined to finish the front sometime in the not too distant future.  Which means in the next month or two.  As always, I’m eager to take on something new and lazy about finishing the old.  I’ve been obsessed with running and the like lately, but I’m feeling my interests circle back to crafting, just a little bit.

In other news, like half of the world, I can’t stop thinking about the Thai soccer players.  Of course there are people dying right and left all over the world, but everyone is coming together to save these people, and it’s sort of a failure of humanity if they can’t manage it.  So, I’ve checked CNN more in the last couple days than in the previous couple months.  Hopefully there will be good news in the morning.

I did comparatively less crafting in 2016 as compared to 2015.  About halfway through, the exercise bug bit me, and I’ve found I really only have time for one serious hobby.  I can do more than one hobby half-heartedly, and I can do some reading, but I can’t really engage with both crafting and exercising.  Perhaps as the kids get older, that will change.  Nevertheless, I did finish a few projects last year.

I started with a baby quilt for a friend’s little girl.  This project was based on a Red Pepper Quilts pattern, and I had to learn how to sew curves.  That was definitely challenging.

My next project was a throw quilt for my uncle who is battling a recurrence of stage IV colon cancer.  He mentioned that chemo made him cold, so I made him a quilt with wool batting but all cotton on the outside.  It was quite an undertaking as it was quite large, and each square had to be cut out and individually placed.  I bought fabric for the recurring diamonds but otherwise used exclusively scraps.

Next up, I made a couple of fully lined tote bags for L’s  preschool teachers.

I also made progress on my Farmer’s Wife quilt.  I have between 40 and 50 blocks pieced now; that probably means I’m somewhere between a quarter and a third done with the project.  Ah well – I’ll finish it sometime.

I ventured into the world of garment sewing last year as well.  I have mixed feelings on it.  I was quite pleased with the outcome of my first project, a dress for L:

My second project was a lot more work.  I learned a lot making a princess dress.  I was frustrated, and had to rip out lots of stitches, and the finished product was far from perfect.  Nevertheless, it was overall fun, and I’m sure I’ll do better the next time.  The hardest part by far was the gathering.  The skirt and the bustles were extremely full and required very tight gathering which was quite hard.  My solution in the end was to use 18 weight thread for the gathering.  I have heard others recommend yarn.  50 weight thread just broke and broke and broke.

I didn’t sew much else that I can recall, and I had no “finished objects” knit.  However, I did start a new knitting project that I’m quite excited about.  St. Brigid has been on my bucket list for many years, and I finally decided to take a crack at it.  I obviously have a long way to go, but I’m excited about this project.  Hopefully I’ll finish it in a year or so.

I’m not sure where sewing will take me in 2017.  I’m working on an Aerial Grove quilt from Carolyn Friendlander’s awesome quilt book, Savor Each Stitch.  I’d love to do another Friendlander quilt, or maybe another Red Pepper Quilts design.  Hopefully I’ll manage at least a couple of quilts this year.  I’d like to do some knitting as well.  We’ll see where the mood takes me.

I’d also like to try some new type of crafting this year – maybe embroidery, or cross-stitch (which I’ve done before, but not for many years) or perhaps weaving.  Weaving would require a loom, which runs around $300 for a decent one.  I love wool, and I’m very intrigued by the possibilities of weaving.  My inspiration comes from photos from Virtual Yarns.

L had her third preschool session yesterday.  She actually has only one more as we are heading to New York and Virginia in less than two weeks, and we’ll miss the last two sessions.  Anyway, it was a beautiful day, and we had a lot of fun.   The theme was birds, so we headed out with pictures of many local birds and started looking for them.  We didn’t find much other than a few robins and the like, but we had a lovely hour and fifteen minute walk through the slough.  The slough is a wetland and has forested areas, marshy areas, and today we came by a beautiful creek I hadn’t seen before.  The teacher had the kids do things like use sticks and moss to build their own bird nest, pretend to be birds by flapping their arms and eating worms (and we found some real worms), and walk quietly so they could listen to the birds.  The last was tricky since B was feeling particularly talkative at that moment.  Also, I was glad I was in shape as carrying B for all that time is definitely a bit of an endurance exercise.  While I could always bring L to the slough myself and take us on a nature walk, sometimes it’s just so much easier to follow along and not have to come up with the plan.  So far, L has been loving it, and I’m hoping things will go well next year when I’m not around. 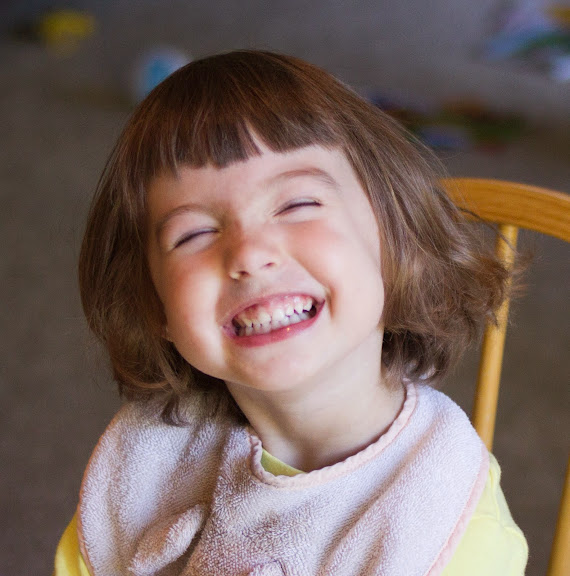 In other news, my next quilt is in work.  It’s going to be scrappy, and color and fabric selection is both challenging and expensive.  I think for my next one, I will do something using pre-cuts to make things a bit easier.  I probably won’t be able to finish this one before my upcoming trip East. 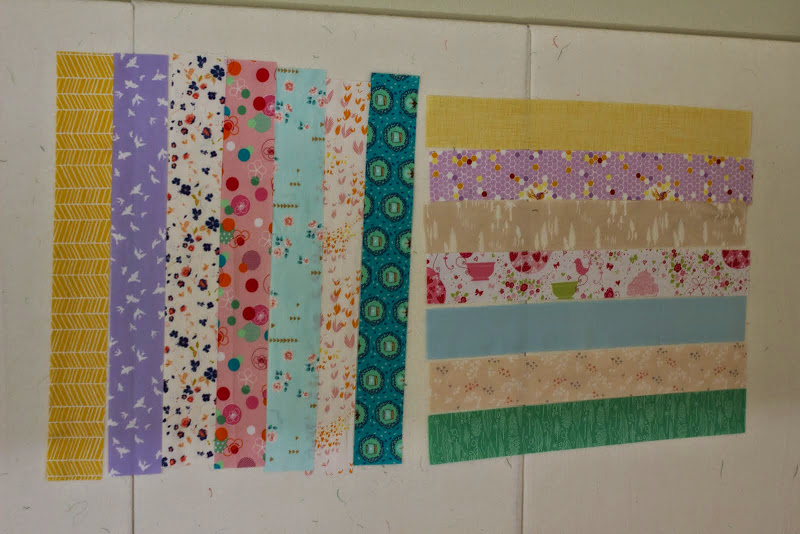 B’s baptism gown is finished, but more on that later. 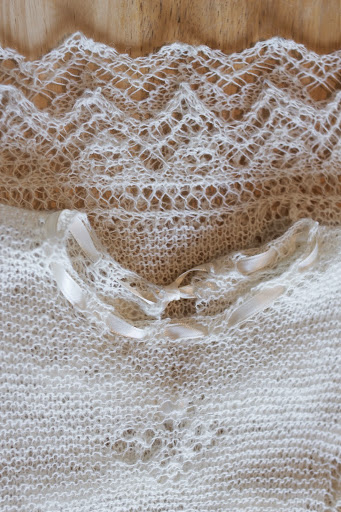 Well, the knitting is down.  The knitting, the grafting, and the overcasting. 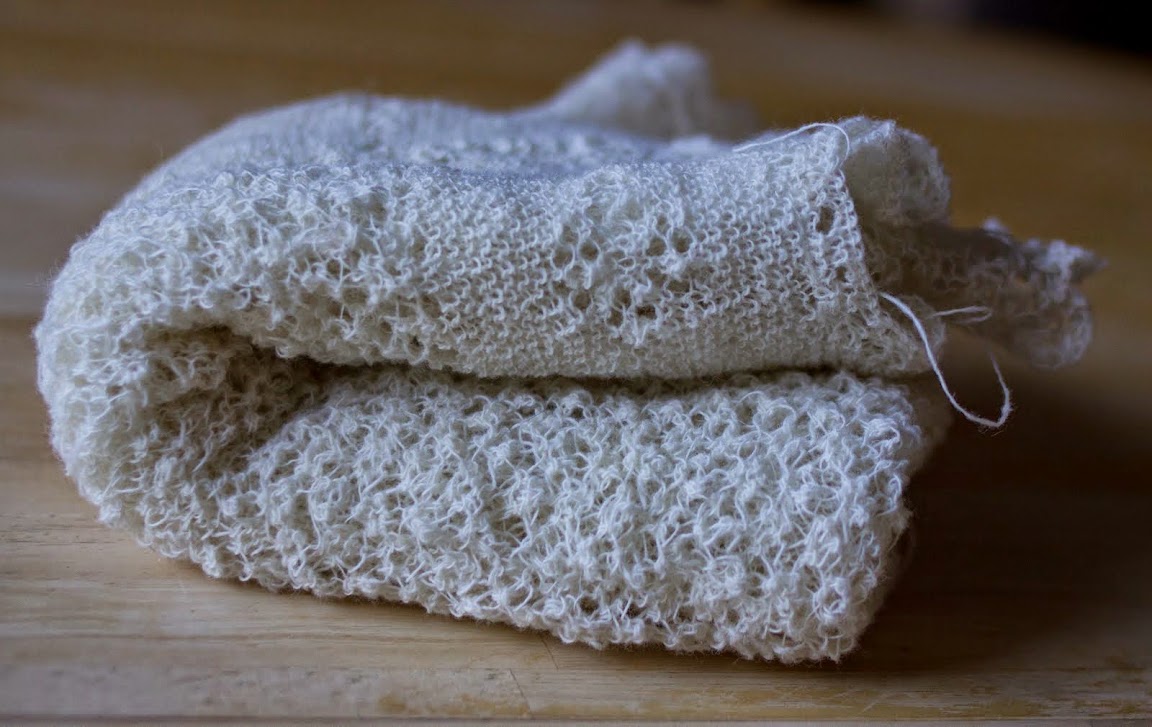 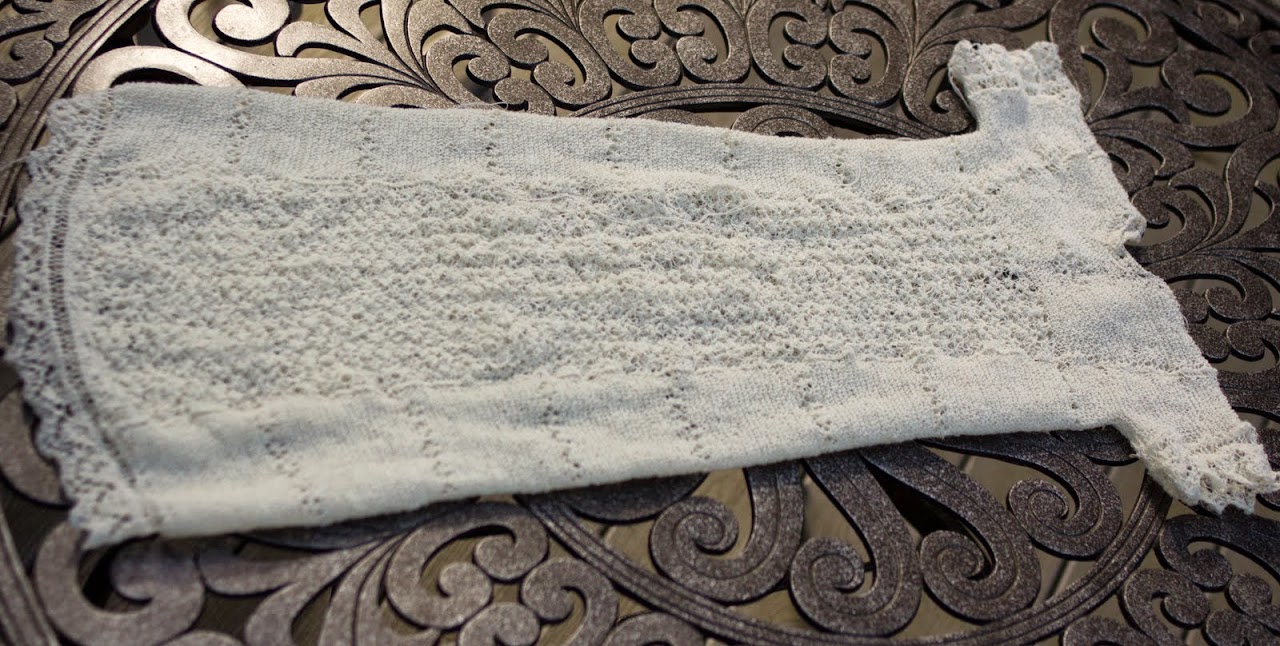 Blocking remains, and for this I need a piece of cardboard, or pieces, that is 39″ by 21″.  Hopefully the diapers I’m expecting in the mail on Wednesday will fit the bill. 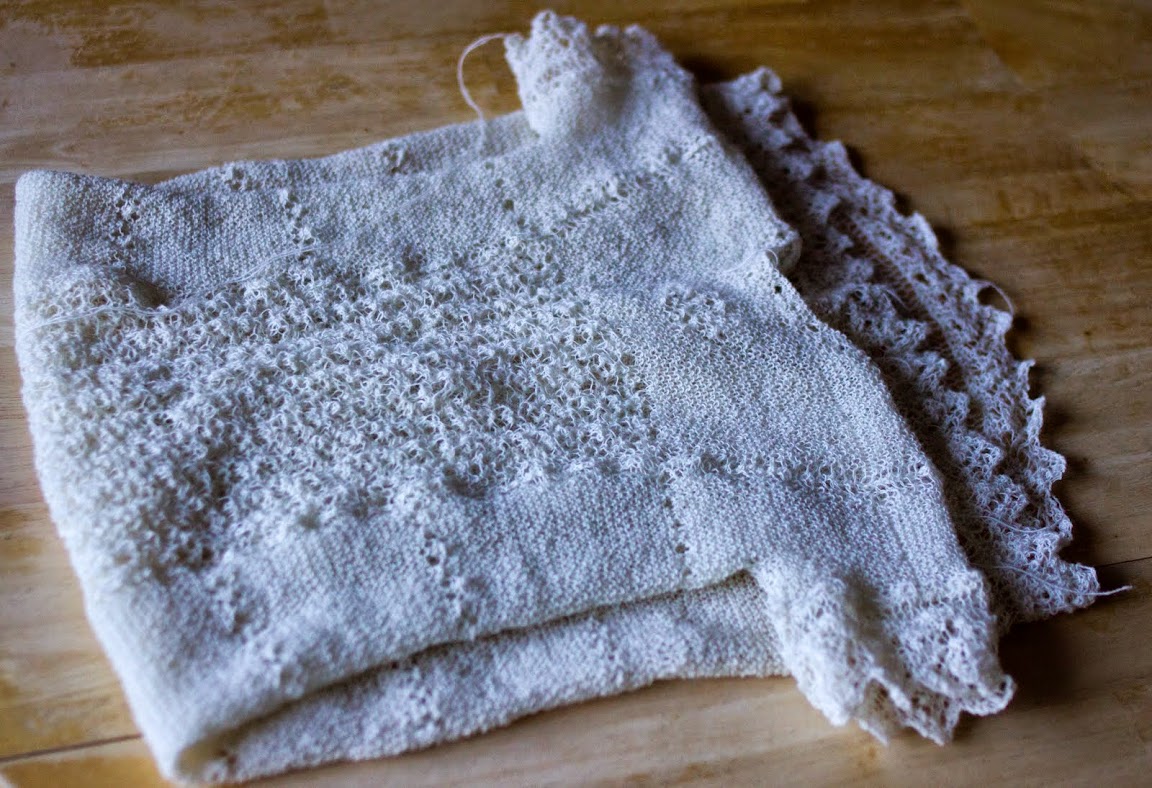 Regardless, I’m pretty pleased with it right now.  It’s light and airy and weighs in at only 90 grams.  B will wear it over a plain slip, and it should extend more than a foot beyond her feet.  I hope I can get a decent picture of her wearing it.  Photographing babies is never easy. 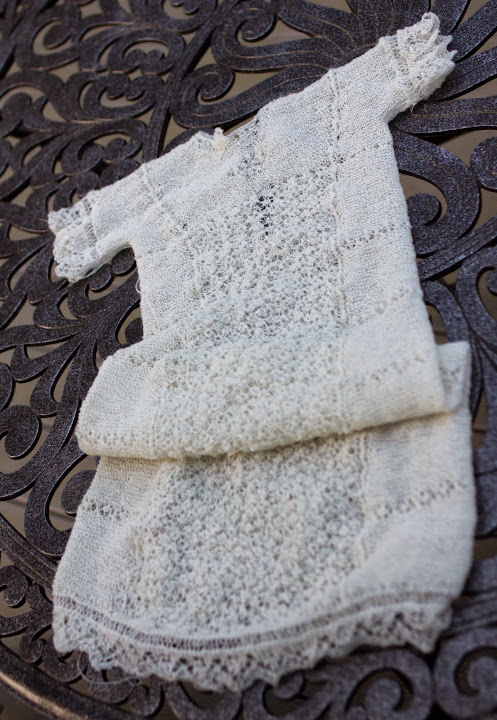 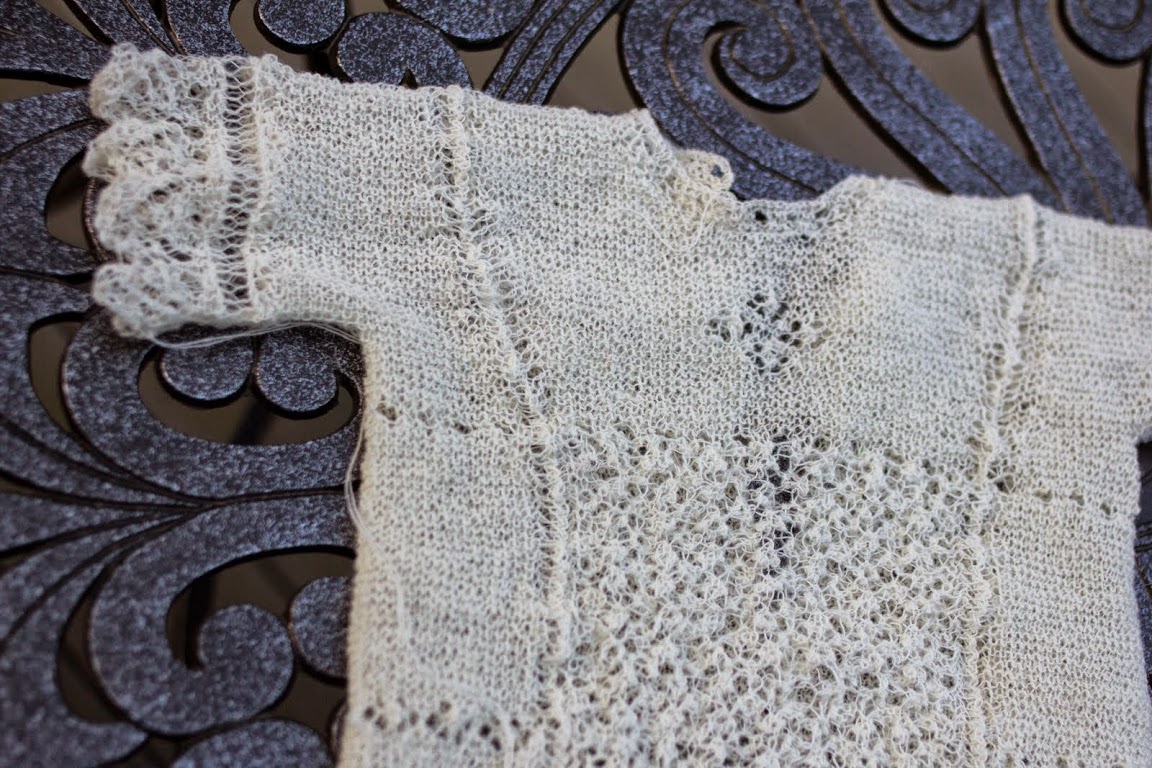 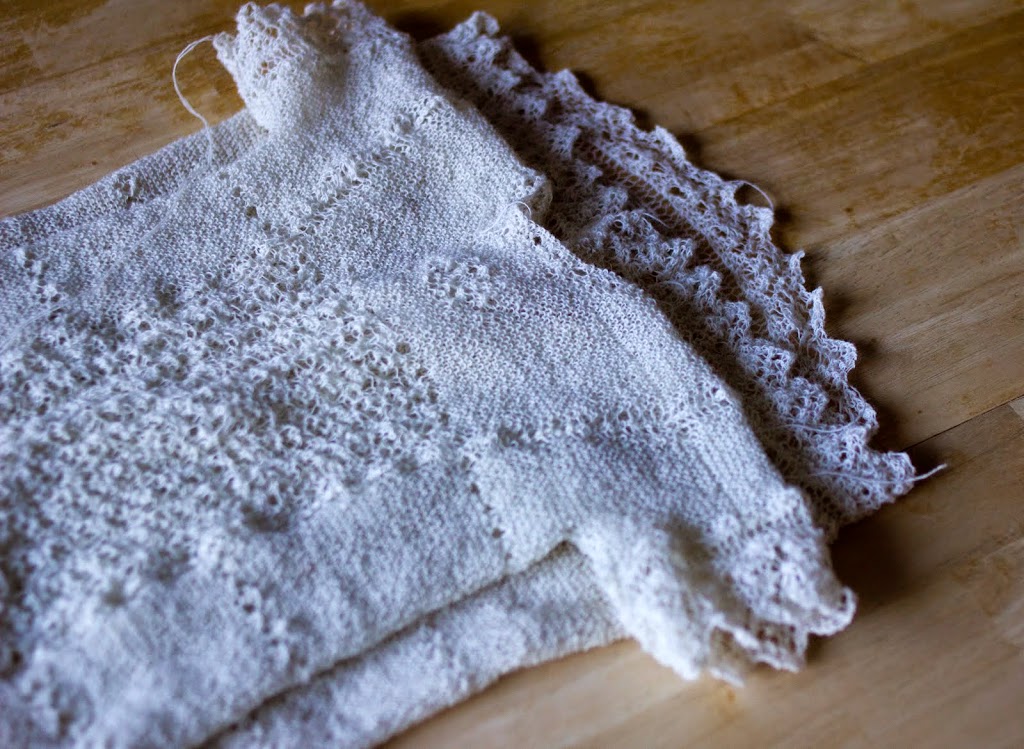 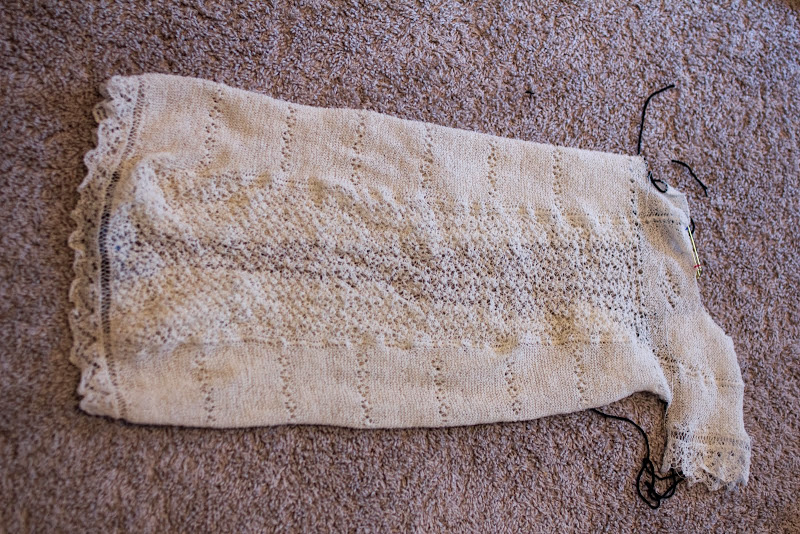 The knitting is done.  The gown now looks like the photo above except that it has two sleeves.  I still have one to two weeks of finishing – grafting, fixing mistakes, weaving in ends, and finally blocking – but the end is in sight.

I’m a much better lace knitter than when I started this project.  In some ways, I’d like to knit another major lace project, maybe a Shetland shawl, but most likely I’ll take a long break.  I’m eager to make some quilts, some baby quilts, some throws, and then a twin quilt for L, and finally a queen quilt for our guestroom.   But I’m getting ahead of myself.  On to grafting for the moment.

It looks like I will most likely be having B baptized in Roanoke in May. As such, I want to finish up the baptism gown I originally started for L. This is possible, but by no means easy. Before tackling that project, however, I wanted to close out another open knitting project, a cute little shrug with a heart on the back that I knit for L. 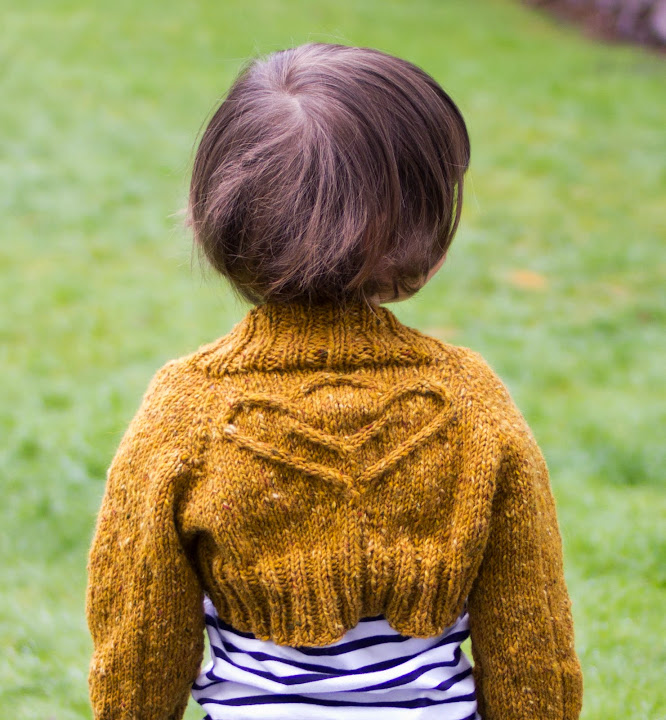 The pattern is in the book Contemporary Irish Knits

, which I own.  It has several cute knits for kids I’m excited about doing one of these days, hopefully while I still have kids of my own to knit for.  The shrug went very quickly and was uncomplicated.  I did not even bother to block it, though I suppose it would probably look better if I did. 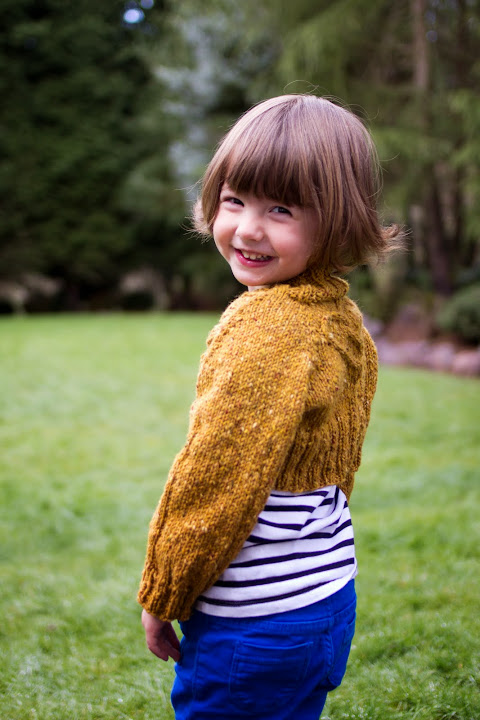 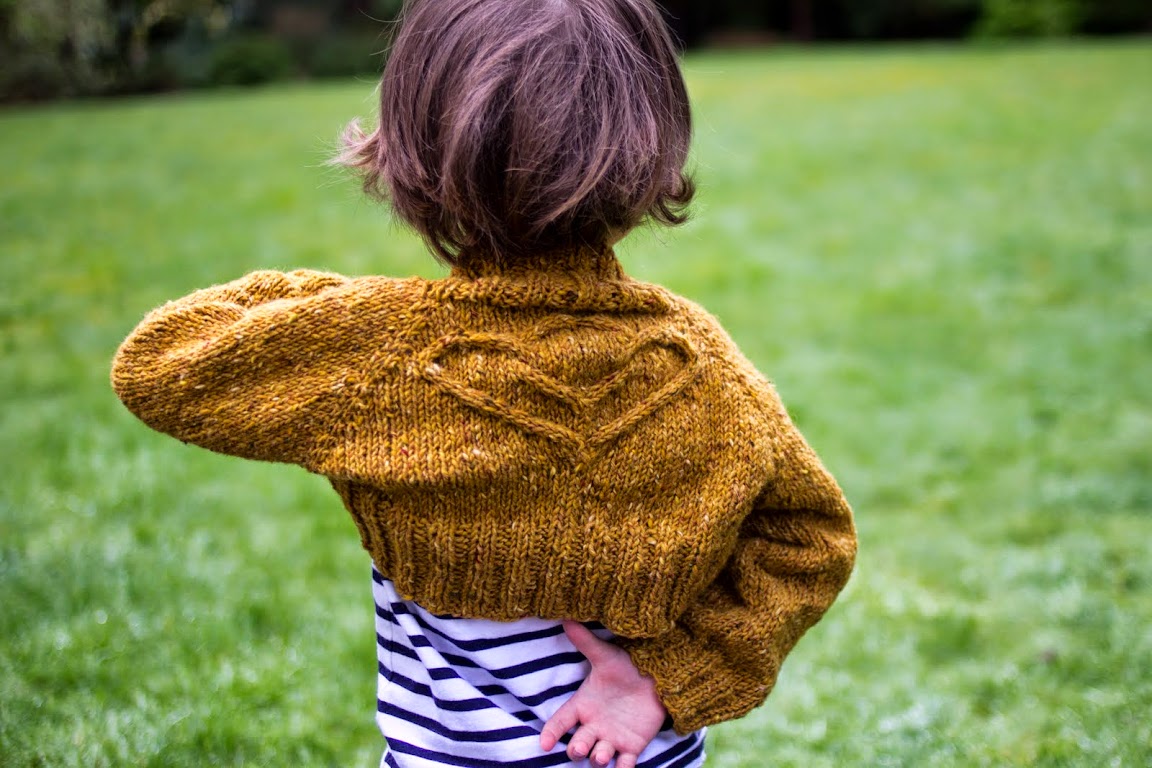 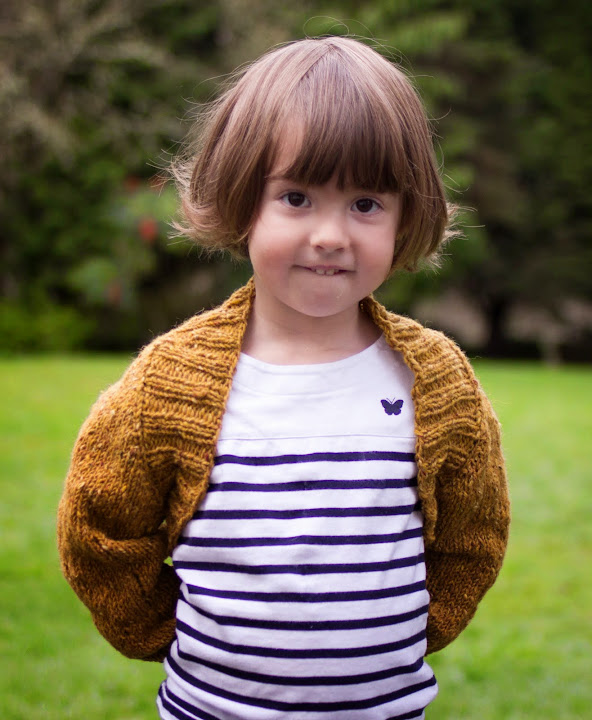 L was an obliging model, as always. 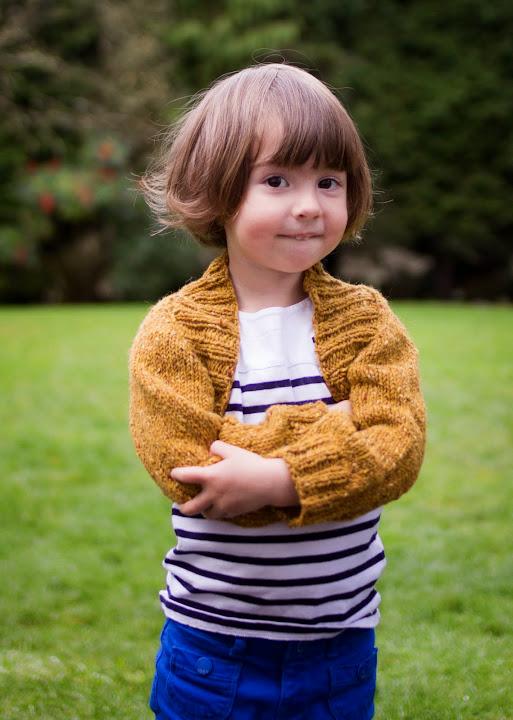 , in gold.  I can’t get enough of that stuff.  If I was independently wealthy, I’d buy stock in every color. 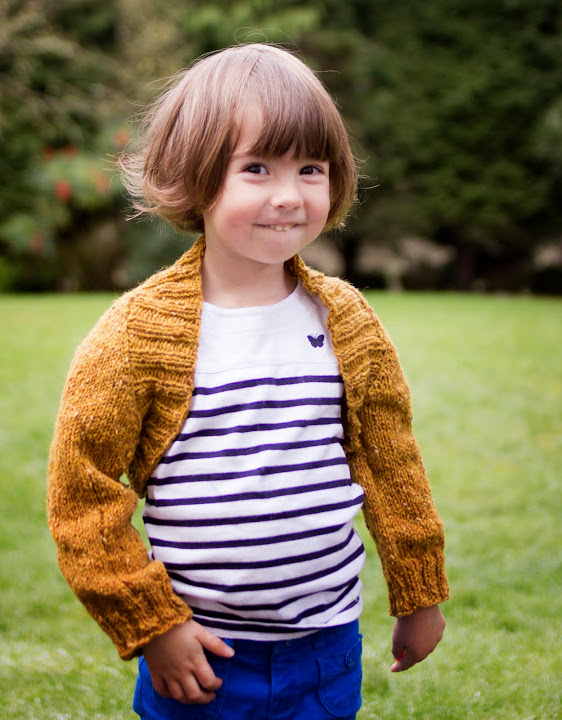 The baptism gown is an entirely different beast.  It’s in the style of Shetland lace, knit on tiny needles with cobweb-weight yarn.  I must have made a couple hundred mistakes in it so far, but I have to say I’m a much better lace knitter than when I started.  Right now, though, it doesn’t look like much.  Lace, however, must be blocked, so I’m hopeful it’ll look much better when it’s done.  If, of course, I ever finish it. 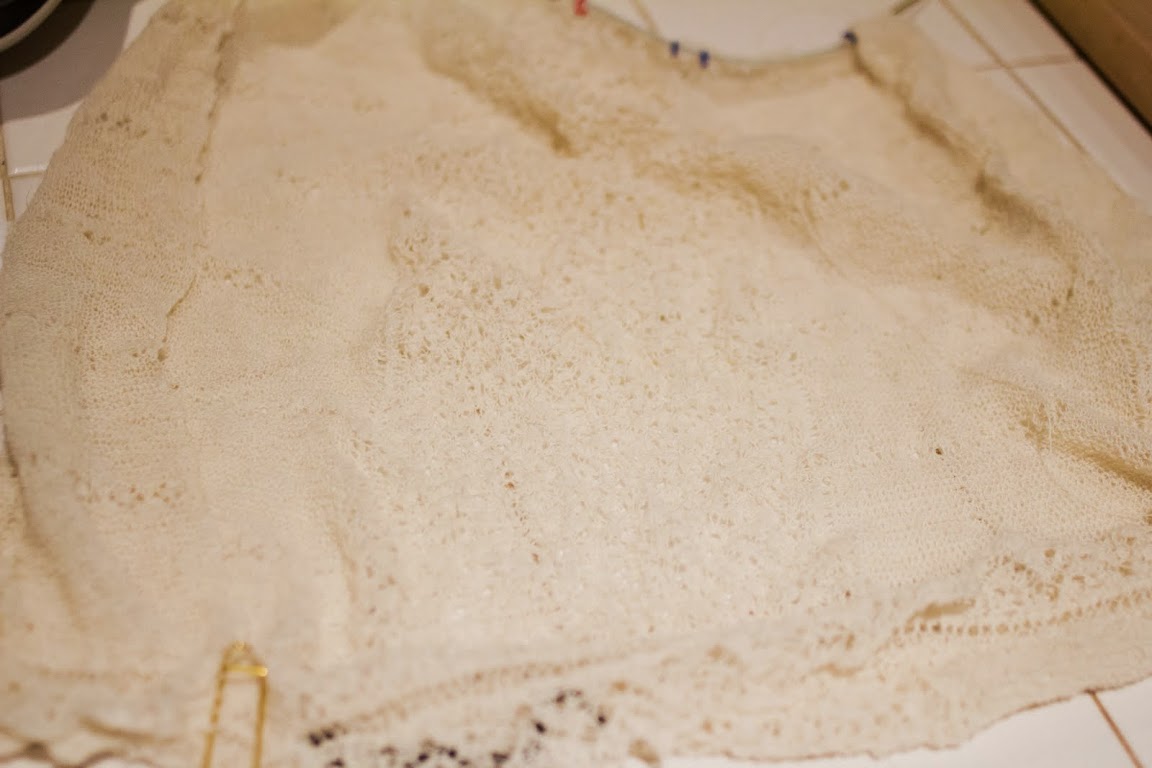 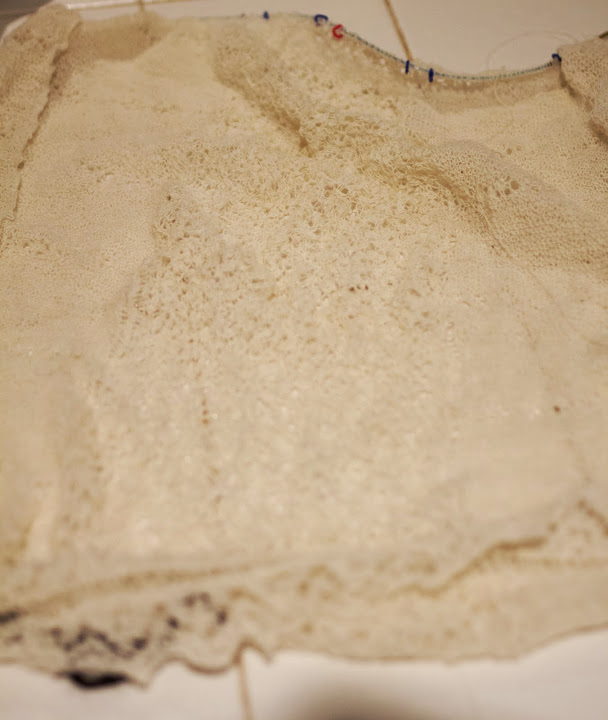 I finished a couple of knits recently, one smooth and easy, one not so much.

First, I made a bunting in bulky cotton for Karen.  The problems started when I chose super bulky yarn.  It was almost impossible to achieve the correct gauge with the yarn.  Nevertheless, I went up a needle size and persevered. 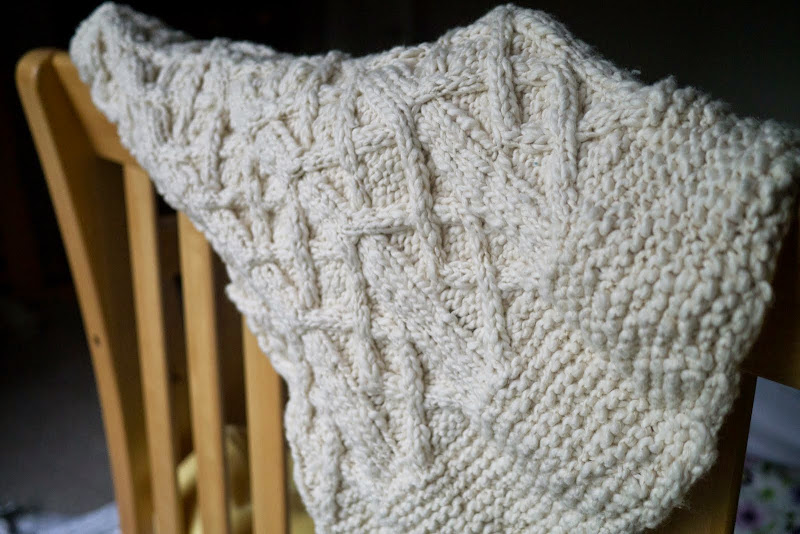 The thing was a bit of a beast and weighs a ton.  But, it is warm and very soft.  Cotton is a pain to knit with (because it’s not flexible), but it’s great for babies.

Next, I wanted a quick and easy knit for a co-worker’s baby.  I chose to use my favorite yarn, Debbie Bliss Luxury Aran Tweed in a beautiful green.  It’s not ideal for babies as it’s not machine dryable, but wool is pretty tolerant to spit-up and can easily be spot cleaned.  I’ve never had to wash L or B’s wool baby blankets for example.

Once again, B modeled.

I couldn’t manage to coax a smile out of her long enough to get a good shot. 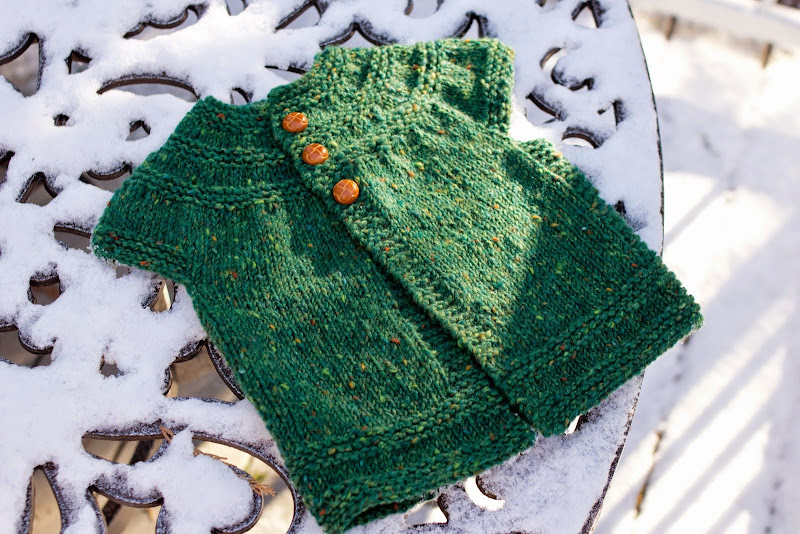