We’d been wanting new knives for years . . . and finally bought some.  Cheap and awesome.  Recommended.

I pretty much despise sunscreen, but as the only person in my family (of birth) that hasn’t been diagnosed with skin cancer, probably due to living in Seattle the cloudy, I feel obligated to wear it.  I’ve been really liking this stuff.  It doesn’t smell.  It’s not messy on your skin, and it’s quick to put on.  When you just need a little on face and arms, it’s perfect.

These are seriously the most comfortable shoes I’ve owned in a long time.  So comfy.  So cushy.  And kind of stylish as well.  What more could one want?  They run about a size large, so size down.

I am also loving my new Balega socks.  I run exclusively in Balega socks, and have been for about a decade, probably more, actually.  Many of my socks are nearly ten years old, and I’ve only had to throw away one pair due to wear.  Pricey, but comfy and very long-lasting.

I am also loving my new Nike Pegasus Turbo 2 running shoes.  They are ultra light and more cushioned than my regular, heavier shoes.  This is the first time I’ve run in Nikes in more than a decade, but I think I’ll be sticking with these for a while.

In terms of other great things, I’ve just updated Jonathan’s outerwear.  (He probably hadn’t bought a new jacket in the better part of a decade.)  We bought him a rain jacket and a puffer, both from REI.  REI has some very good deals running right now if you’re in the market for outerwear.  I remember getting good deals at REI years ago, but I’d kind of given up on them in recent years.  They don’t have free returns, but I think it’s worth it.

Alternate blog title: Blogging, a great way to procrastinate from running and other productive activities.

So, if you’re a savvy Amazon shopper, no doubt you’ve noticed that Amazon reviews have serious issues these days.  I am a person who used to buy the product with the best reviews most of the time, unless it was significantly more expensive.  I’ve found that fake or paid for reviews are absolutely pervasive on Amazon.  I’ve found that my entire shopping approach has changed.  Nowadays, I look for name-brand products, because I’ve found that brands like Asics and Sony don’t pay for their reviews.  However, I miss the days when I could buy the no-name cheaper product because a bunch of people tried it, and it was awesome.  I got burned a few times on products that had hundreds or thousands of 5-star reviews and turned out to be absolute crap.  The solitary one-star reviews I left made no difference, I’m sure.  I’ve also mostly given up writing reviews these days, and I’ve found that when I do write reviews with less than 4 or 5 stars, they’re often rapidly down-voted.  There was a time when I used to watch my reviewer rating, and this kind of thing is a motivation not to write honest, negative reviews.

Nothing irritates me more than, “I received a free product in exchange for my fair, unbiased review.”  Ha.  I immediately mark such reviews as “not helpful.”

Enter fakespot.com.  I’m sure you’ve noticed that it’s possible to spot fake reviews.  You can tell in various ways.  Sometimes, a whole bunch of 5 star reviews appear one after the other, during the same couple of weeks.  Other times, half the reviews are only one or two words.  The reviewer either has ONLY reviewed this product, or only leaves 5-star reviews on other random products.  And so on.   This is fine, but it’s a pain to do manually.  I don’t know what fakespot’s algorithm is, but in my spot checks, they are spot on, ha ha.

These days, I routinely run Amazon URLs through fakespot to determine whether a product is too-good-to-be-true or actually awesome.  It seems to work well for all categories, including books.  There’s nothing more annoying than spending 2 or 3 hours reading an entire book that received wildly positive reviews, think it’s horrible, and notice that it was self-published and, hmmm, who are all these reviewers anyway?

I decided to blog this after being just about to put Thru-Hiking Will Break Your Heart on my to-read list.  Now, I have not read this book.  It may be fabulous.  It has a rating of 4.5 stars with 998 reviews.  However, after reading the plot synopsis, I became suspicious.  Basically, women decides to hike PCT to escape pressures and distractions of modern world and meets lots of interesting and lovely people along the way.  Sound familiar?  I mean, it’s been written a few times before.  Why did so many people find this particular version of that plot line extraordinary?  Well, Fakespot gives the reviews an overall C, for a fairly high percentage of low-quality reviews, and provides an adjusted rating of 3.  Given my suspicions, I’m inclined to give this one a miss.

Try it for yourself.  I know I sound like a pitchman, but I assure you, *I’m* not getting compensated by anybody.  I just believe in reviews that are ACTUALLY fair and unbiased.

We have a lot of inclement weather in Seattle, famously of course.  I’ve been getting out and exercising more lately, and I’m rediscovering my cold weather and wet weather running gear.  There are a couple of items that stand out.

First, I love my Patagonia Flyer Gore-tex running jacket.  Let me count the ways!  It is so amazing.  It’s ultra-light weight and I don’t feel like I’m wearing a rain coat at all.  It’s slim fitting, so given that I found the right size (M) it doesn’t flap around like a lot of looser rain coats.  A looser rain jacket is great for casual wear, but for running, I love the slim fit.  It doesn’t have a hood, which again is idea for running.  I have no interest in running in a hood.  I find a baseball cap is perfect for keeping the rain off my face.  They discontinued it for a while, but it looks like it’s being sold again.  It’s regularly available on eBay for about $100.  I have it in silver.

Second, my sister bought me some Sugoi Women’s MidZero Tights

.  I’d always thought of Sugoi as a biking company, but their running tights are rock-awesome in cold weather.  These are warm tights – strictly for 42 or 43 degrees and colder – and then only in overcast, rainy or windy weather.  I haven’t been pushing too hard on my runs lately since my cardiovascular system is in better shape than my muscular/bones/joints (due to lack of weight-bearing exercise during pregnancy).  If you’re pushing hard, they’re ideal for low 30s and colder.  Anyway, they’re super-soft and stretchy and work really well on my non-curvy shape.  If you are hour-glass shaped, these may not be the best choice.  If you have a large waist and don’t like to be cold, these are fabulous. 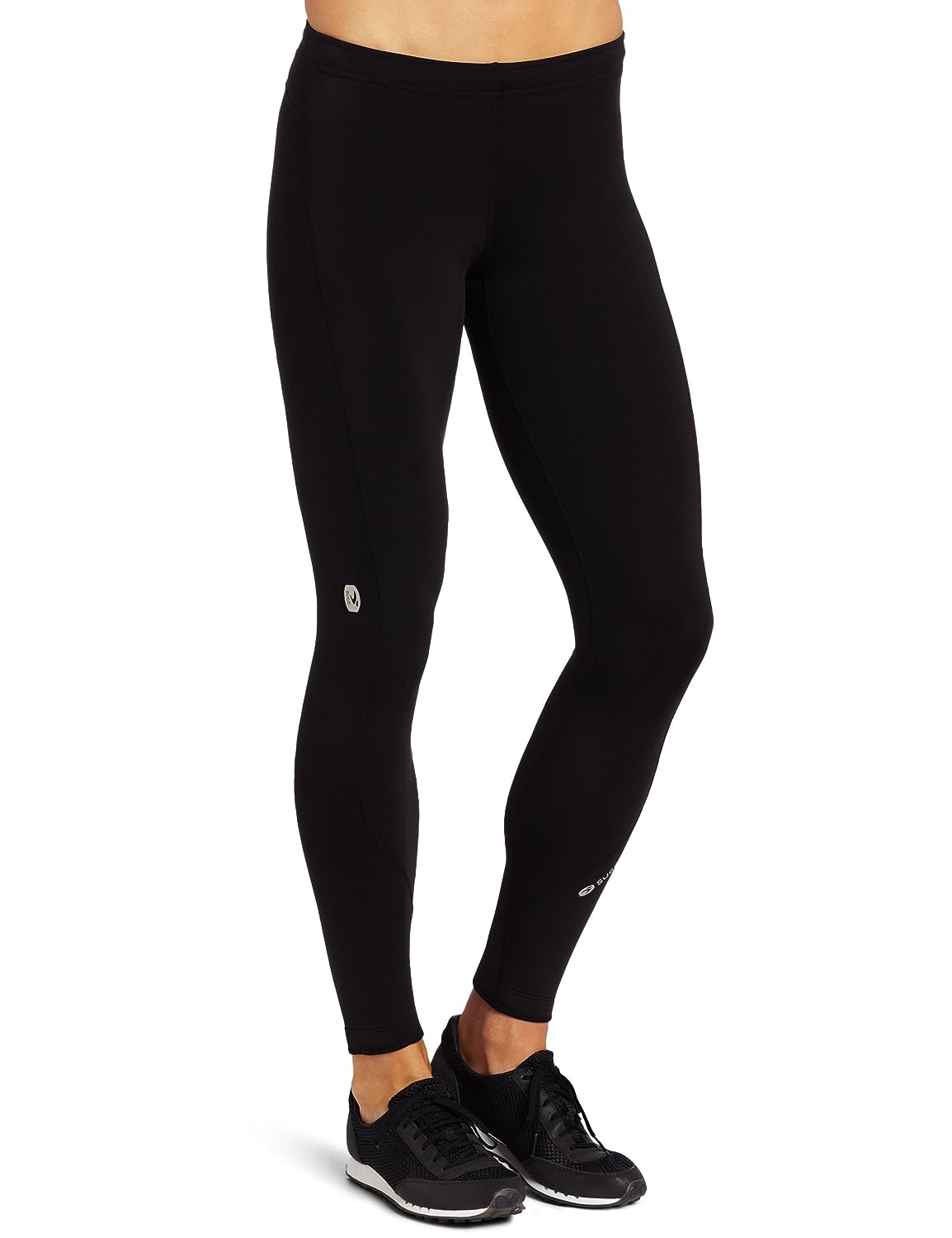 , hoping I’d like them as much.  I was not disappointed.  They are by far the most comfortable of the capri tights I’ve tried, though admittedly, I haven’t tried that many.

I’ve never bought a long-sleeve running shirt, but once I run my first 5K, I plan to reward myself with one, probably Sugoi.  I ran 2 miles yesterday and today, so I’m slowly and painfully making my way back to fitness.  Today’s run was no picnic with 43 degrees and steady rain and of course my neighborhood hills.