My rainbow world quilt has been progressing, step by (slow) step.  Sometimes I wonder what the point of it all is, but whether I can explain it or not, quilting is what I want to do with my free time these days.  And so I continue. 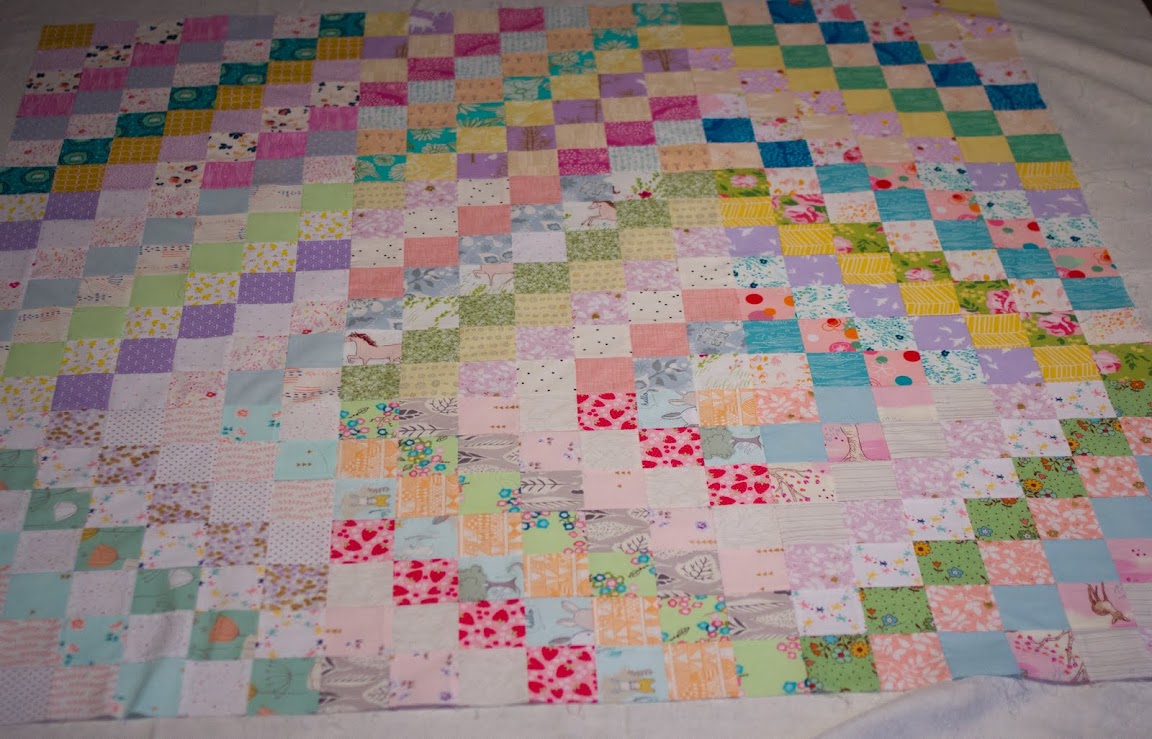 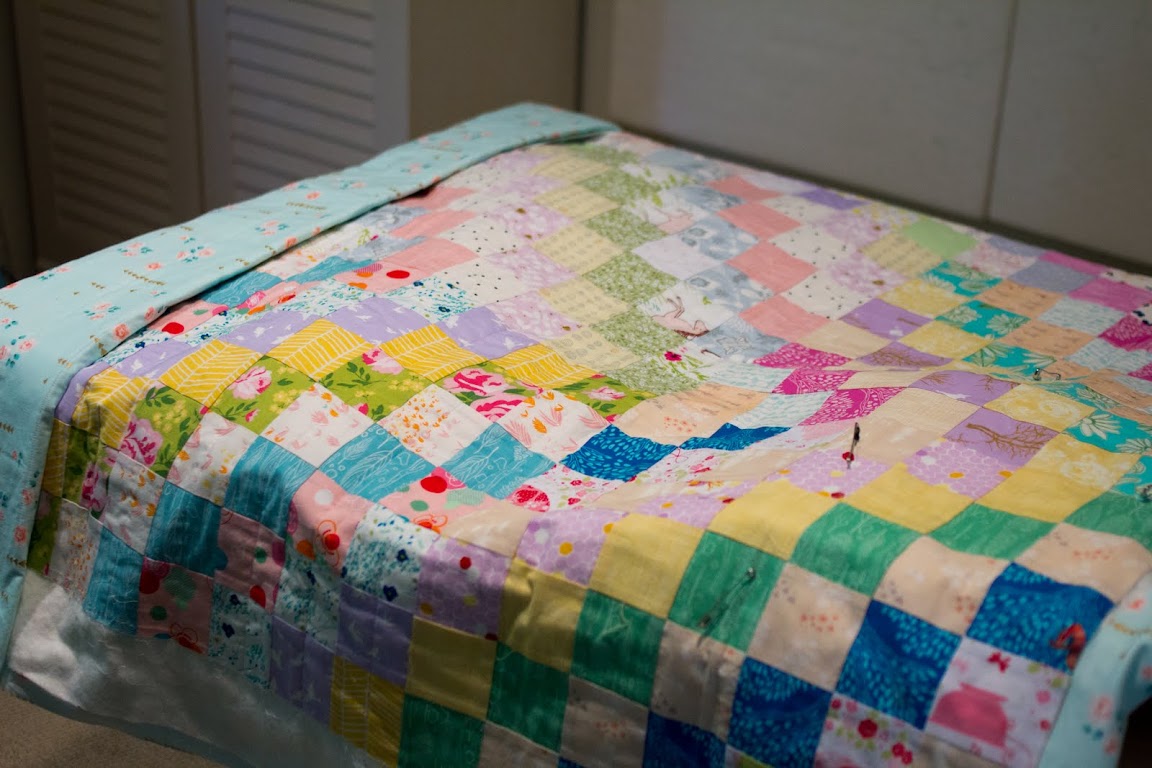 Quilting halfway done.  I decided to quilt midway through the squares in both directions.  It’s a bit boring, but it’s serviceable, and the point of this quilt is the patchwork, not the quilting.  I guess.  I do question whether some type of stippling or loop-de-loop might now have been better.   I doubt a non-quilter would notice either way. 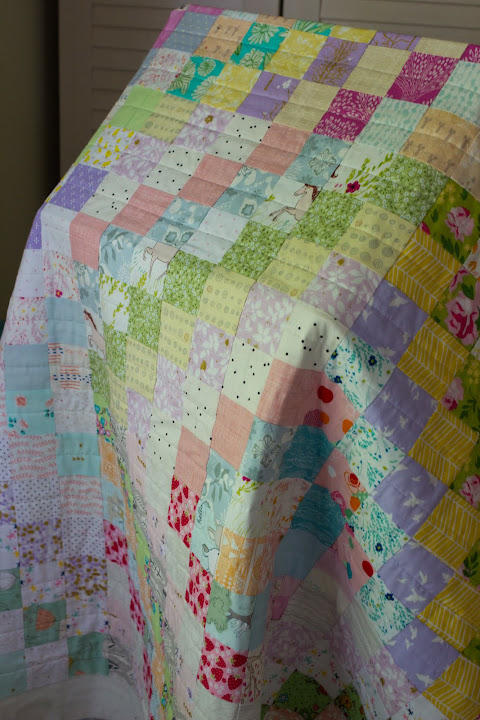 Now, I just have to do the binding.

We have a playdate with the intended recipient on Wednesday, so we’ll see if I have time to finish it. 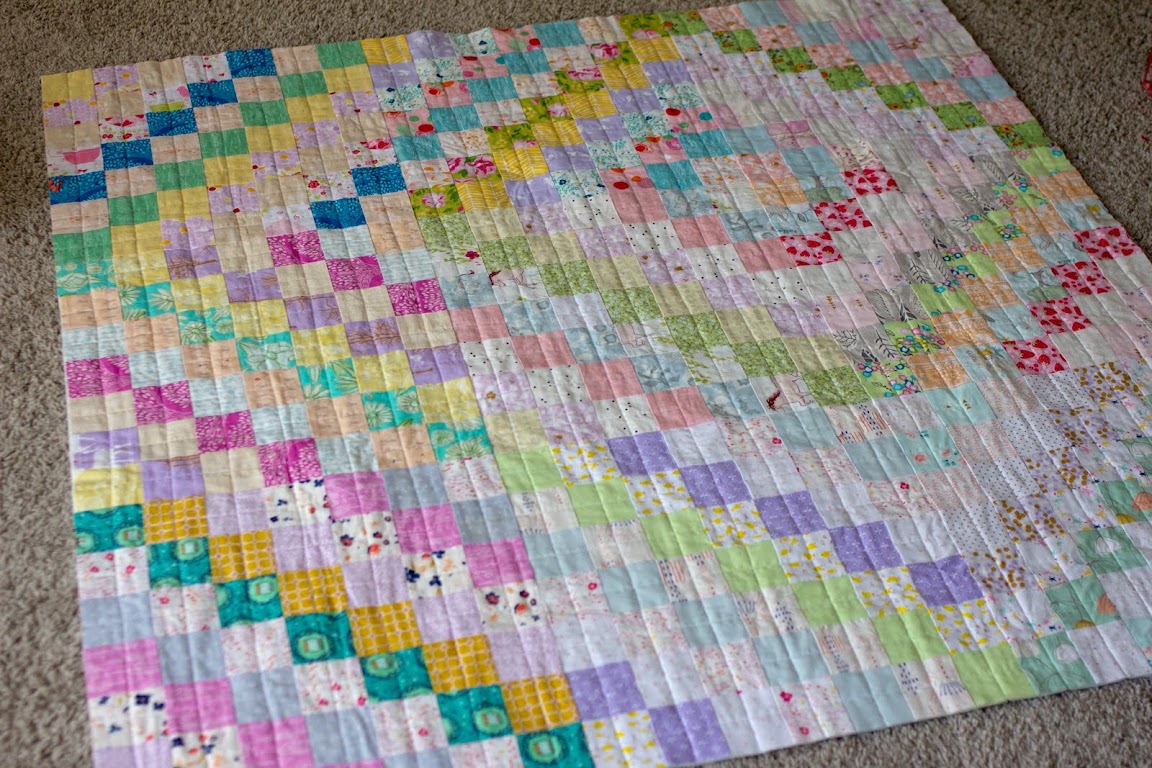 Now that we are home, I’m back to work on my rainbow-colored around-the-world quilt.  It’s going well; I’m nearly done with the front.

I have definitely had some moments where I have asked myself if this color scheme is really going to work.  I am using the colors of the rainbow – all six of them – along with neutral colors for seven by seven squares.  I have realized that using six non-neutral colors is very ambitious, probably two ambitious given my skill and experience level.

Nevertheless, I actually think it’s going to turn out OK.  Once I started slicing and dicing the strips into squares, things started looking better.   I think the scrappy around-the-world pattern is fairly forgiving.

I have not been fussy-cutting, but one square had to be manually removed.  The quilt is intended for a child, and I can’t see including a horse’s ass.

Anyway, I’ve done eight of the nine squares.  I’ll finish the final block tomorrow night, hopefully, and then I’ll put together as simple a back as I can manage.  Hopefully, I can start quilting next week.  Given the complexity of the front, I’m leaning towards straight line quilting diagonals.

Seriously, folks, I need to pull the trigger on curtains for our master.  I actually went so far as to price linen and linen blends and blackout lining with the idea of making them myself, but it’s actually not that much cheaper than just buying them.  I had a look at the ones we did buy, and making curtains is not as trivial as you might think.

I’m pretty much down to two options – solid blue, or white with blue stripes.  The problem is that I just do not trust my own judgment.  When interior decorating talents were being handed out, I was at the back of the line, and they ran out before they got to me.  H is no better.  Any thoughts on the pros and cons of solids versus stripes?  Keep in mind that we are looking out at grass and fir trees – basically a wall of various shades of green.

I intend to keep our current drapes and may use them in the winter.  I’m not really interested in a blackout shade as my longer term plan calls for a sheer linen drape behind the outer drape.

Our master isn’t really decorated like anything much, but I prefer light colored woods – “natural” is usually how they are described.

And here is a photo of B for taking the trouble to read this far:

Home sweet home.  We survived.  I’m very glad we made the trip, but wow, it is good to be home.  Travelling with a nine month old is no joke.  There will be many more pictures and words to come, but for now, I am enjoying my bed, my laptop, my fan, our view, my quilt downstairs, our kitchen, and on and on.  Perhaps most of all, I am enjoying the cooler weather.

In less than 12 hours, we’ll be taking our first plane journey as a family of four.  Given all that’s been going on, I’m glad I don’t have to fly solo with the two kids, but I’m still a bit nervous.  I think L is going to be a great traveler, but B will be more challenging and of course my damn ears always stress me out.  Still, one direct flight – it should be smooth sailing, I think.