See the previous entry for the New York Times list.  In no particular order (fiction only):

Of these, my top few would be:

And if I had to pick just one, I think I’d go for Cloud Atlas.  So there you have it – the best fiction book of the last 125 years.

What are your picks?

The New York Times has a “vote for the best book of the last 125 years” feature.  Their nominated books, alongside my Goodreads rating and any thoughts I had on them, are listed below:

Out of this list, I’d probably vote for the Grapes of Wrath.

Which is your favorite, or your favorites, off this list?  Vote here.  Excepting Ulysses and Lolita, I’m excited to take a crack at the ones I haven’t read.

It will just be the five of us, and I’m trying to keep it simple.  None of us likes turkey, so we’ll have Ribeye steak . . . with bacon, because it’s a holiday, and bacon makes everything better.  We’ll also have from scratch stuffing, butternut squash soup, and pumpkin trifle.  And cranberry sauce from a can.  ETA – and carrot bread!  Which L makes from scratch without any help except putting it in and taking it out of the oven.

This will be our second time making the trifle; L did a dry run last week, and wow.  I highly recommend it if you’re looking for an extra dessert.

What are you cooking for Thanksgiving?

It’s two weeks until marathon day!  I’ve been training eleven weeks, and I have a two week taper left to go.  Some stats, with two week to go:

So far, the weather in Sacramento is looking excellent.  I’m in the process of trying to figure out what to wear.  I’m thinking short sleeve or sleeveless top with arm warmers and gloves plus Fast and Free shorts from Lulu.  I’d rather wear loose traditional running shorts, but I think I need all the pockets for phone plus gels plus a place to put gloves.  I found arm warmers for $5 on Amazon, so my plan is to toss them away as the weather warms up.  (It should hit 50 before the end of the race.)  I’ll be wearing Nike Vaporfly 2s, which were pricey, but are very comfortable and will give me a nice mental edge.

All the calculators tell me I should be able to run at least 3:50 pace.  It never pays to underestimate the marathon.  This race humbles A LOT of very well prepared people.  I am hoping that I am not one of those people.  With that said, if I am feeling well that morning, I plan to go out with the 3:50 pace group and try and run sub-3:50.  With that said, I’ll be happy as long as I finish without needing medical assistance, and I’ll be delighted if I break 4 hours.  But I have trained hard for this, and I think I’d be selling myself short if I don’t go out at the pace I’m in shape for.

We can’t take the kids with us (thanks CDC quarantine guidelines) so we’re planning to be there only about 24 hours.  It’s going to be a whirlwind trip.  If it takes me longer than 5 hours to finish, we’ll have trouble making our flight.  So, yeah.  Hopefully I finish “on time” or thereabouts.

As I write this at 10:35 at night, I should add that unambiguously, my biggest weakness of this training cycle has been going to bed too late.  I don’t know what is wrong with me.  I am just terrible about going to bed at a reasonable hour.  Tips?

Unfortunately, data from Europe is making it more and more clear that vaccination will not stop Covid, even if very high percentages of the population are vaccinated.

Case 1 – Ireland.  89% of Irish citizens age 12 and up are fully vaccinated.  More than 80% of those vaccines were Pfizer or Moderna, with the remainder Astra Zenica or J&J.  In other words, it’s a fairly similar profile to the US.  Their vaccination drive peaked in July, or about four months ago, so vaccine effectiveness waning would be less than in the US.  (You hear a lot about vaccine effectiveness waning at 6 months or later, but my take on the data is that the sharp dropoff starts at 4 months, or even 3.)  Ireland also still has mask mandates for adults and restrictions on large indoor gatherings, unlike most of the US.  In addition, there are vaccine mandates there to do just about anything indoors.

Despite the high rate of vaccination and other measures, Ireland’s cases per capita now exceeds the case levels the US experienced during its late summer Delta surge.  Of course, US numbers are lower because, being a large country, our numbers average out when one part of the country is surging and another isn’t.  In addition, Ireland is doing more testing than the US, and they haven’t yet seen a corresponding surge in deaths.  Deaths are starting to tick up there, so it’ll be telling to see how that goes. 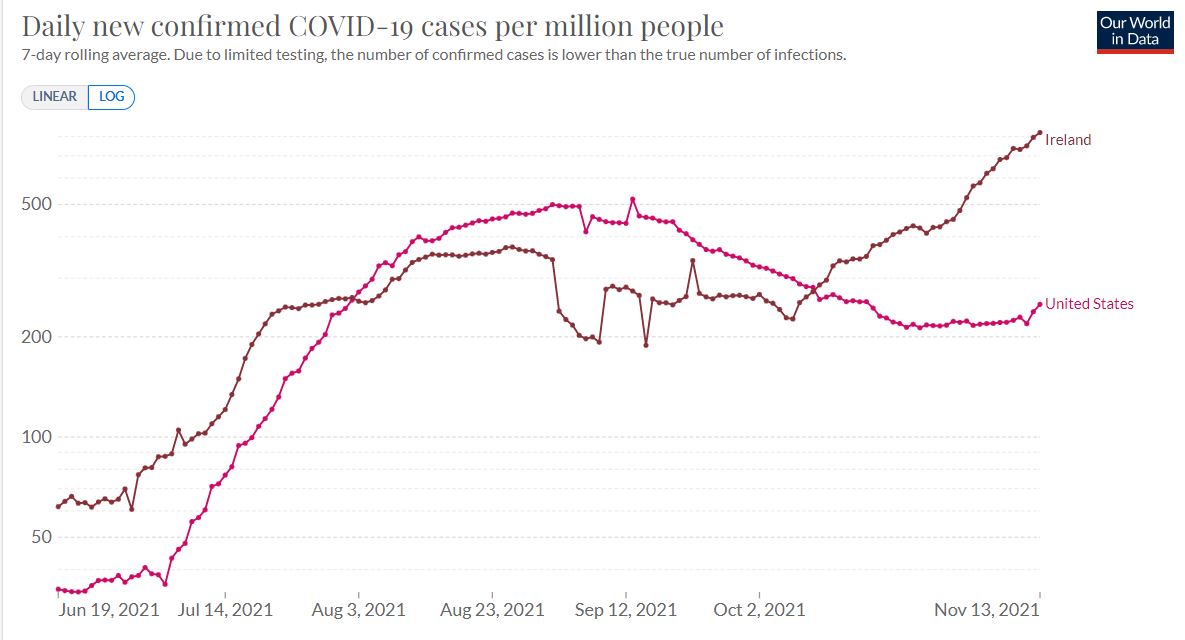 Case 2 – Iceland.  Like Ireland, Iceland has a vaccination rate for ages 12+ of about 90%.  Also like Ireland, Iceland is experiencing a major Covid surge.  Iceland has a number of restrictions and Covid mitigations in place basically banning large gatherings.  With the new surge, they are introducing new rules restricting gatherings to only 50 people, limiting opening hours for restaurants, and imposing % capacity restrictions on everything from swimming pools to ski areas to gyms.

(It is worth noting that Iceland, being a small remote island, doesn’t exactly have overflow capacity for its hospitals, so it’s reasonable for them to take measures that might not make sense in the continental US.  Ireland’s relationship with the UK is . . . standoffish, and they don’t seem to be cooperating on Covid in any way, shape, or form, which no doubt forces them to also be more cautious, as a small island.)

Case 3 – King County.  We have 84% of people fully vaccinated and 89% with at least one shot.  I don’t think the Covid levels are particularly alarming around here, but the Seattle Times subjects us to regular hysterical headlines about hospitals being overwhelmed, and we have a mask mandate for indoors and larger outdoors gatherings.  In any case, we’ve certainly had an ongoing surge for the last few months that never seems to end.

Perhaps most disturbingly, between 40 and 45% of recent deaths in King County are among the vaccinated.  Now, with nearly 85% vaccinated over age 12 (72% of the total population), you’d expect a fair few deaths in the vaccinated population, but more than 40%?

Given the greater contagiousness of Delta and its greater severity, I do think the vaccine is likely making a huge difference.  Unfortunately, I think, at 70% effective against contagiousness and 90% effective (at best – probably less for the people who need it most) against hospitalization, we’re not much better off than we were at the beginning, with the wild type, before the more contagious alpha variant.  The new treatments from Pfizer and Merck and encouraging, however.  Perhaps they will tip the balance.  The 30,000 foot view for me, though, is that in addition to heart disease and cancer, which both kill about 600,000 people per year, we now have a third disease which will take a slightly lesser toll for the indefinitely future.  Taking into consideration waning immunity, vaccine mandates, future variants, and better treatments, it seems likely we’ll be looking at around 300,000 deaths per year indefinitely (at least – more this year, but vaccines weren’t widely available until spring) and potentially a year or two reduced life expectancy.  I don’t think this is the end of the world; we’ve gain a couple years of life expectancy since the 90s, and things weren’t so bad back then.  It is what it is.  I can only say that hospitals need to be increasing capacity, both in terms of beds and equipment, and staff.  Doing so will take years, and there’s no time to start the work like the present.

What would you do if you had Covid and you were at home and struggling to breathe or otherwise felt in danger?  If you were in the US, you’d either call 911 or go to the ER.  If you were in New Zealand, where 1700 people are isolating at home with Covid by government order, you’d call “Healthline” for help, and you might or might not get a response.  If you didn’t get a response, it would be a crime for you to leave your home and go to an emergency room.  So, you might just stay home and die, as three people have done in recent days.  Until very recently (the last few days), if you tested positive for Covid in NZ, you were removed from your home and essentially imprisoned in MIQ – government managed quarantine.  This includes children, though they could be accompanied by an adult.

I suppose it’s silly to fret about that, given the number of lives NZ has saved by their extreme Covid containment measures.  (NZ has 7 deaths per 1M, as compared to the US’s 2300.)  Still, it’s a bit disturbing.  The New Zealanders already had three years of life expectancy on us Americans, but I’d still rather live here.  Of course, Hawaii has the same life expectancy as NZ.  Something about islands?

Speaking of Hawaii, I think it’s interesting that Ironman has rescheduled the canceled world championships from Hawaii in October 2021 to Utah next spring.  The championships have been in Hawaii (Kona) every year since they started in 1978, but apparently Ironman feels it’s too risky to try again in Hawaii after three consecutive cancelations in fall of 2020, spring of 2021, and fall of 2021.

I am planning on running a marathon in California in December 2021, and I think there’s a fair chance it may be derailed by Covid.  It’s been fairly predictable after a lull in cases that CA was due for a surge right around the time of my race.  Hopefully the surge will hold off long enough for me to get my run done.