We went to see another house recently.  It’s located on Mer.cer Island, which is arguably the crown jewel of desirable locations for a family to live.  The schools are excellent, crime is zero, the streets are quiet, what more is there to want?  It’s also extremely central – an easy commute to Sea.ttle or Belle.vue and a doable commute to pretty much anywhere in the region. 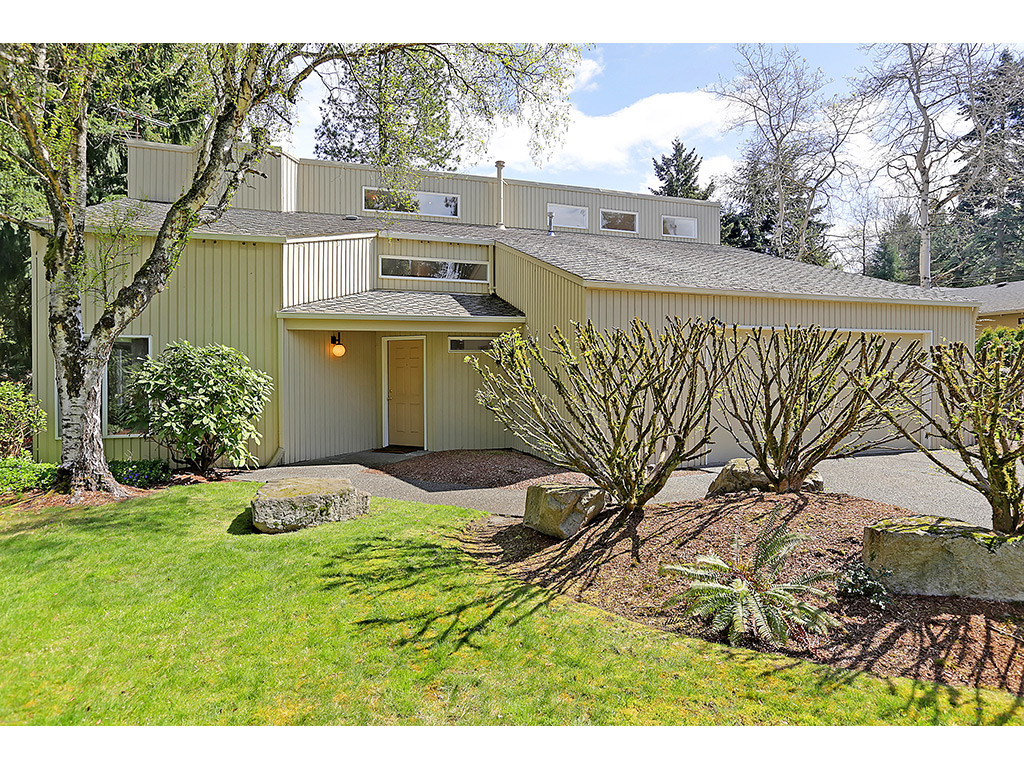 Anyway, the house in question is actually 20K above our max price, but it’s been on the market for a while – 44 days to be exact.  It meets all our major requirements – 4 bedrooms, >2000 square feet, largish yard, quiet street.  It’s less than a mile from the nearest playground- kind of a long walk for little children, but doable with a stroller.    It’s even closer to another park that has no playground, and there are two nearby parks with swimming areas (< 2 mi).

There are a few issues.  It’s 8 minutes from the highway off the island – not that long, but we’d be doing that 8 minute drive A LOT, and that just gets you to the highway.  Traffic on the highway on and off the island can sometimes be awful, and there is no alternative other than to swim.  The commute to and from my work would be thirty minutes plus.

Then there’s the house itself.  Three of the four bedrooms are tiny.  They are probably not big enough for a queen-sized bed.  Given the size of the house (2300 sq. ft.), this is somewhat surprising, but as with many older and particularly 70s-era houses, the layout is not the best.  It has a fairly useless foyer (too small for much), a small living room, and then a larger sitting room.  One living room would have been much better with more room for the bedrooms.  It has three bathrooms – again two with more room for the bedrooms would have been better.  It also has a ridiculously large closet for the master.  This makes sense in the larger, well-laid-out 3000 sq. ft. houses we’ve seen, but for this house, it’s silly.  The closet is almost as large as the undersized bedrooms.  Finally, the master is on the top floor and the bedrooms are all on the bottom floor.  This is obviously not ideal.

So, yeah.  It’s the first house on MI that we considered a viable prospect.  It’s been on the market for quite a while, so if we make an offer, it’s likely to be accepted.  Should we do it?  It’s crunch time if we’re going to buy a house before the baby comes.

L finally got to meet Sarah’s little girl, Emma, this weekend.  I feel like I know Emma already having seen so many photos and read about her on Sarah’s blog, but it’s really not the same thing as meeting her face to face.  Sarah said Emma was more energetic than usual, but I amazed that she literally runs everywhere!  L has to be somewhat motivated before she will run, and she was actually not yet running at Emma’s age.  Anyway, it was great to see Sarah’s entire family.  My only regret is that I have no photo documentation of the meeting!

I finished knitting a long-requested blue dress for L this weekend.  She’s been asking me to knit her a blue dress for probably months, and I finally got sufficiently caught up on my baby knitting to do it.  The pattern was really easy, and I was pleased with the result.  We had fun taking photos in the backyard this weekend. 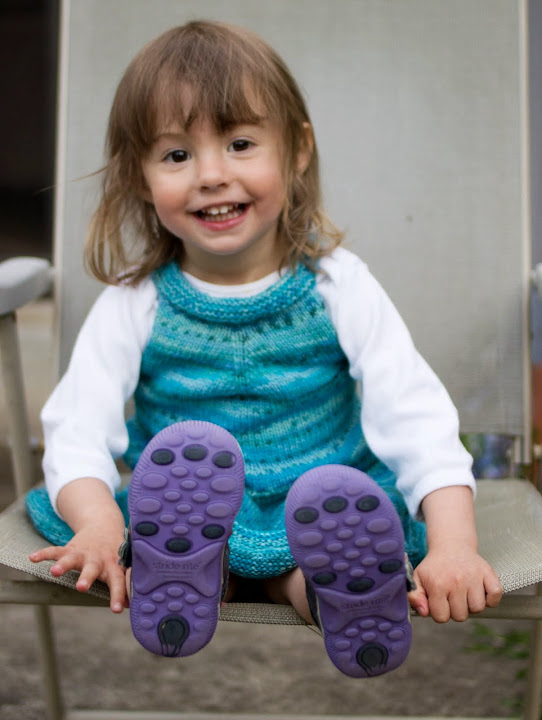 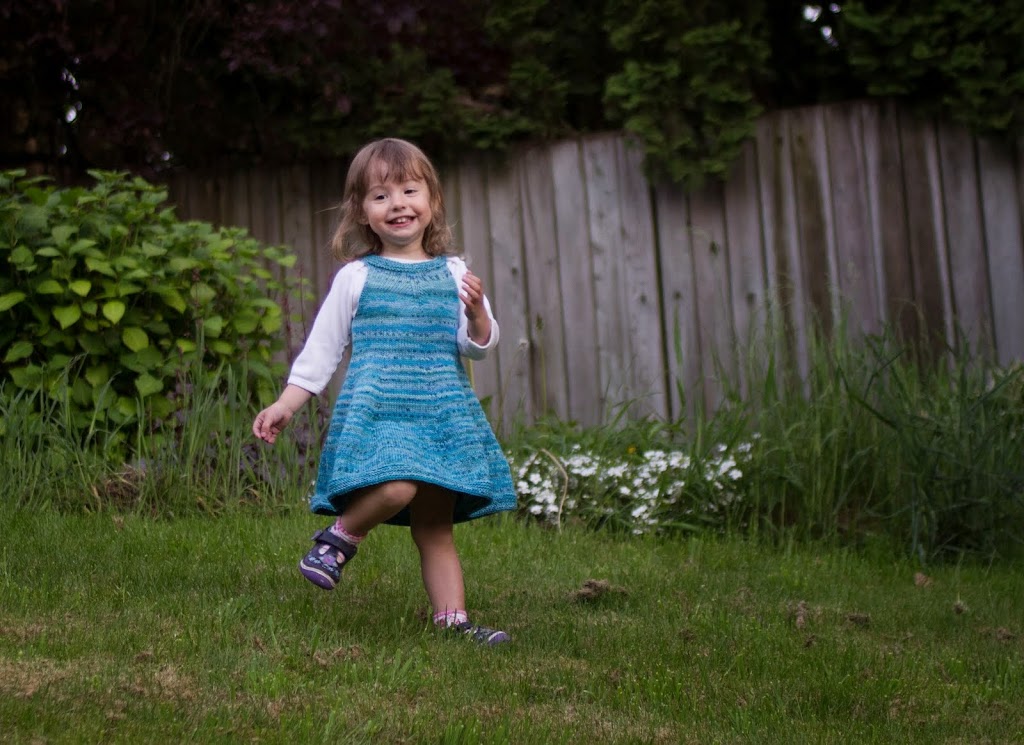 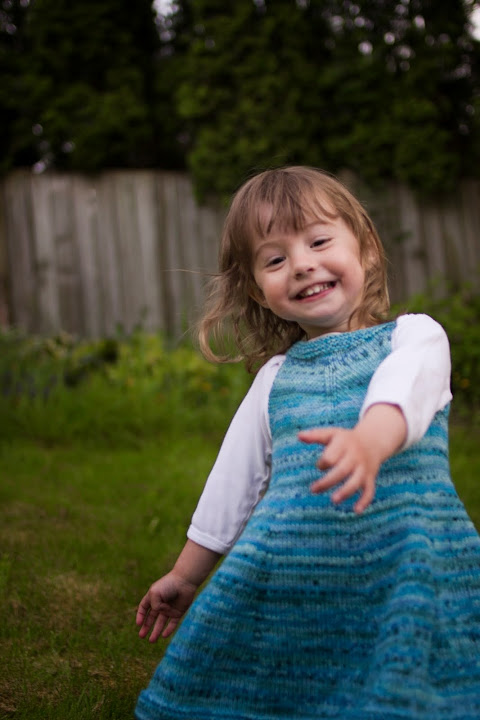 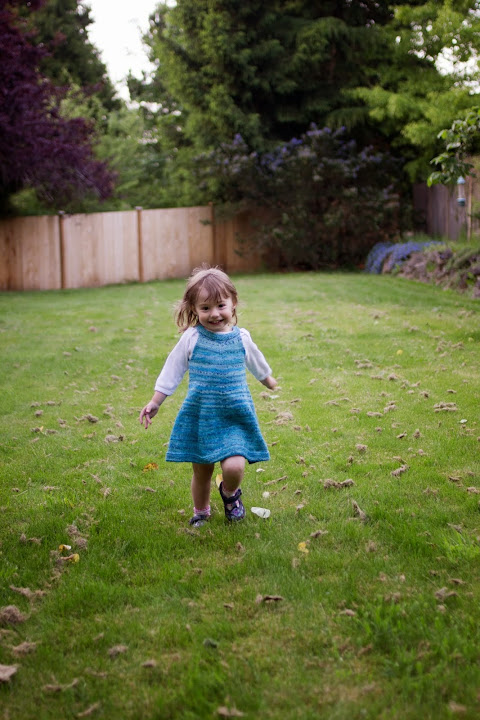 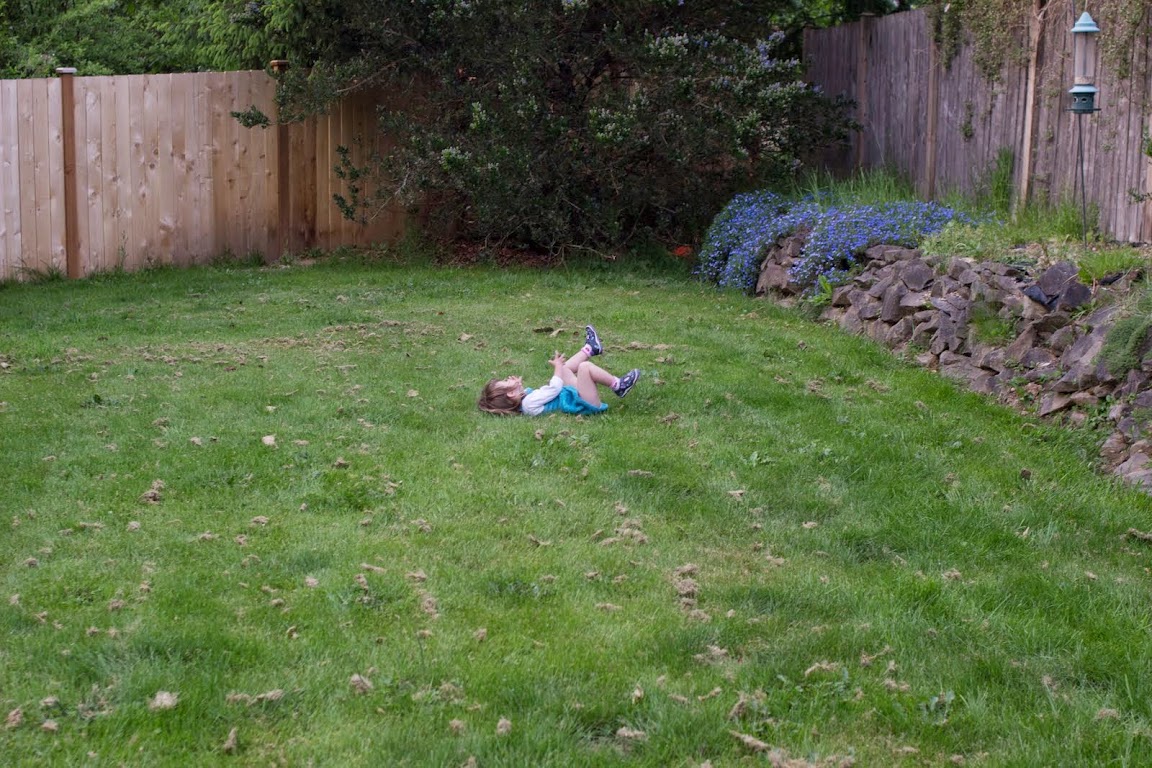 We’ve had fabulous weather the last few days – not too hot and not too cold, and so we’ve been enjoying it by spending plenty of time outside.  L is obsessed with playgrounds right now, and requests going to the playground several times a day.  It’s nice that we have not one but two playgrounds within a quarter mile of our house.  Despite the many things that annoy me about where we live, there are some wonderful upsides as well – nearby playgrounds, great yard, cul-de-sac, lots of kids around, close to work.

We went to see four more houses this weekend.  The first two were in Lico.rice Fern.  This is an affordable area with good schools with the drawback that it is far from pretty much everywhere.  But it’s quiet and beautiful.  It’s basically on the edge of a mountain.

Here’s the first house we saw: 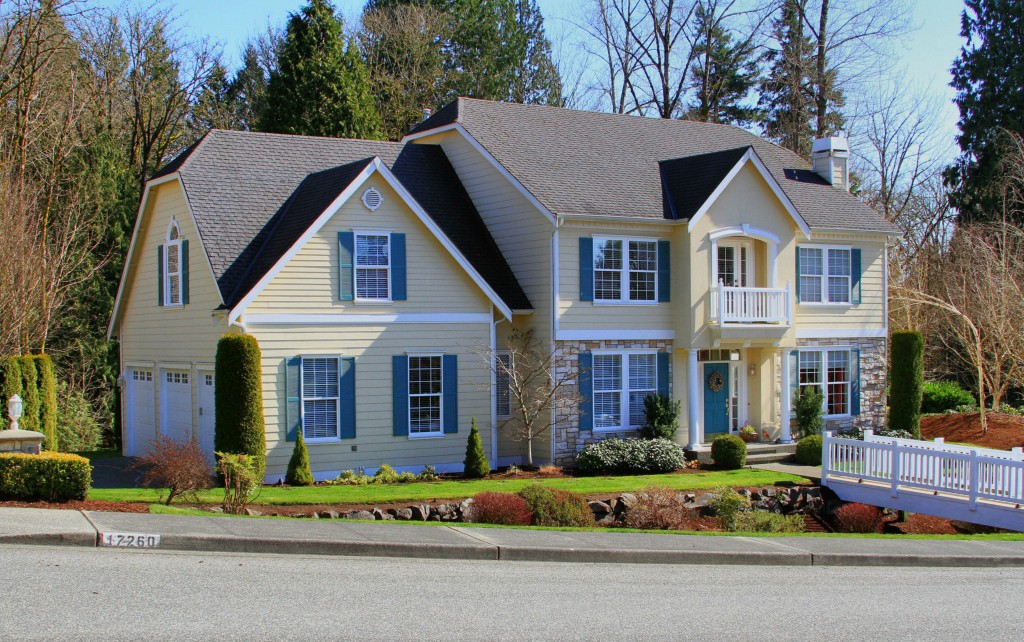 Beautiful, eh?  However, note the bridge out front.  This went over some kind of large drainage ditch with standing water in it.  We haven’t had much rain lately, so I’m definitely concerned about this.  Other than that, and the somewhat remote location, we liked everything about the house.

At 3300 square feet, it’s nearly three times as big as our current house.  Crazy.  More than we need, but very, very nice.

Next we went to a house right up the street.  This house was even bigger (3700 sq. ft.) and had very nice views inside and out.  However, the driveway was very hard to get in and out of, and the yard is very steeply sloped.  I think yard maintenance would be a nightmare, tough even for professionals. 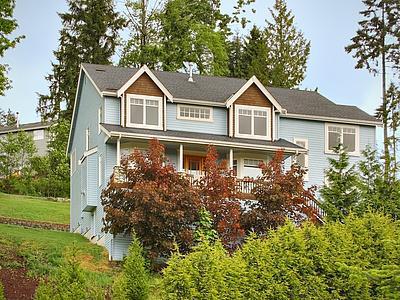 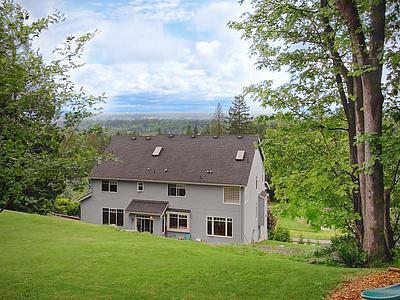 Next up was a house in Issa.quah.  The neighborhood was beautiful, but we vetoed it based on the small yard.  The house was not nearly as nice but was certainly adequate – built 1977, 2700 square feet, decent condition, but this was compensated for by the great location not far from Lake Sammam.ish.  However, we are quite fixed on having a nice yard, so it was on to the next house. 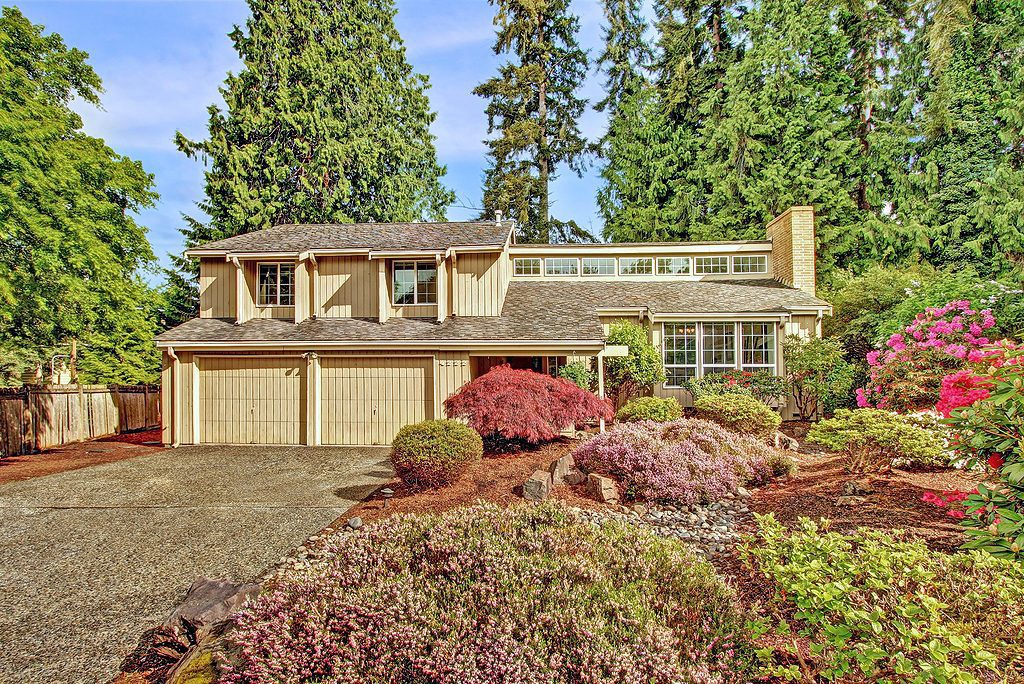 The next house looked nice on paper.  An “affordable” house in Belle.vue proper is not common, so I guess I knew there had to be a catch.  The catch was obvious when we opened the door and were greeted with the roar of the highway.  It was really, really loud.  The house itself was built in 1960 and had 2300 square feet and was in good but not great condition. 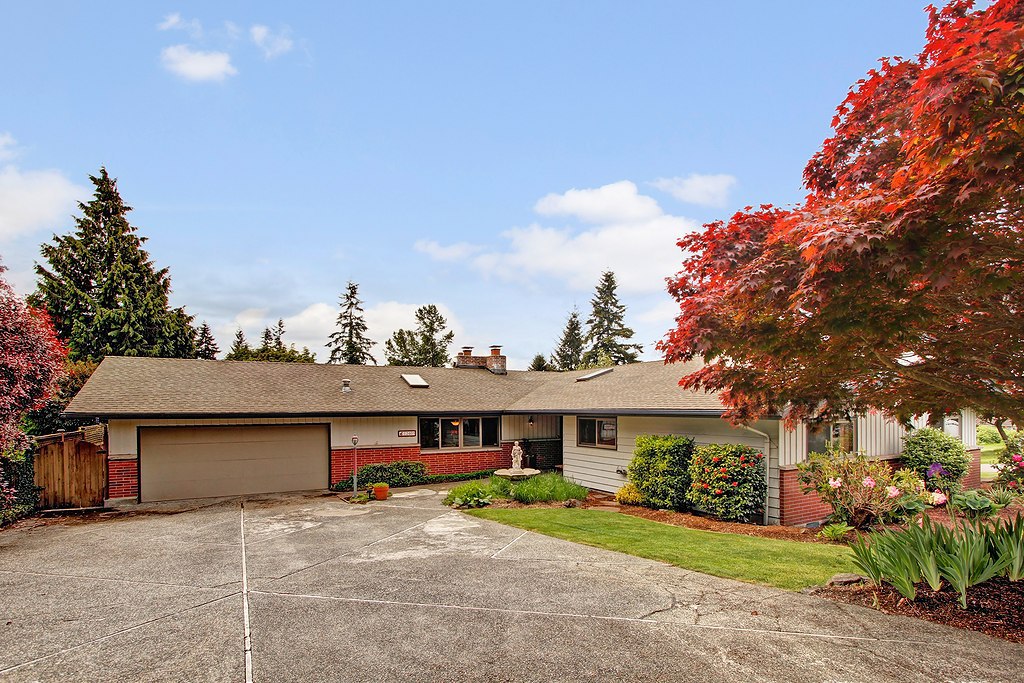 Last week was a hard week with B out of town, back problems, and then having to get ready for my parents’ visit while dealing with the aforementioned back problems and no help from B.

But now I am in the opposite situation.  B is back, and my parents are here, and they are currently taking L for a walk while I quite literally put my feet up.  Ah, leisure time, how I love thee!