I am so. sore. It makes me want to take to bed. Stairs are torture. I don’t recall being this sore after the last one, but perhaps it’s just time as an amnesiac. Work was particularly boring today.

Speaking of work, it was great seeing SpaceX have a mostly successful launch. I honestly never thought I’d see the day when Falcon 9 would fly, but I’m delighted to be proved wrong. Good for them. I thought Elon would run out of money first. But what kind of industry are we in when the only successful companies are started by billionaires? It’s like the opposite of the internet industry. There will definitely be no aerospace equivalent of Facebook.

Well, I am the proud finisher of my third half marathon. The words “never again” definitely passed through my lips today. In fact, on each of the three occasions I’ve done a half – 2004, 2007, and 2010 – I’ve said two things. 1.) I’m never doing this again and 2.) Thank God I’m not doing the full marathon. Why, then, you might ask, do I torture myself? Well, I always feel great after I’m done, and I think it’s important to exercise and keep fit, and signing up for a half marathon and then running it definitely motivates me to do that. I like being in shape, and I like pushing myself. However, sometimes I wonder whether I might not be better off training for a 10K. However, you can definitely fake your way through a 5K or a 10K. It’s a lot harder to get away with undertraining in a half marathon.

B turned into the paparazzi today, so the event is extremely well-documented. I slept fairly well the night before. I’d decided not to put pressure on myself time-wise. I wanted to run under 2 hours for sure, and I strongly preferred to run under 1:55. However, I figured I could do both without any kind of amazing race. However, when I woke up the next morning at 7 AM, I was feeling pretty grumpy. My mood soured further when I learned it was raining, and B agreed to lend me some clothes to keep warm in at the starting line. However, we lucked out and got parking near the start, so I got to stay in the car and sulk until race time. Here’s me looking cold and being surly:

The race started promptly at 9. I really appreciate a race that starts on time. I will never forget shivering on the starting line for hours at one Irish race. However, that race is also the only one I’ve run that had an elite field. I think it’s a bit simpler with a small race with no elites like this one. Maybe you can get a feel for the size of the race from this picture B took. I figure there were a few hundred runners: 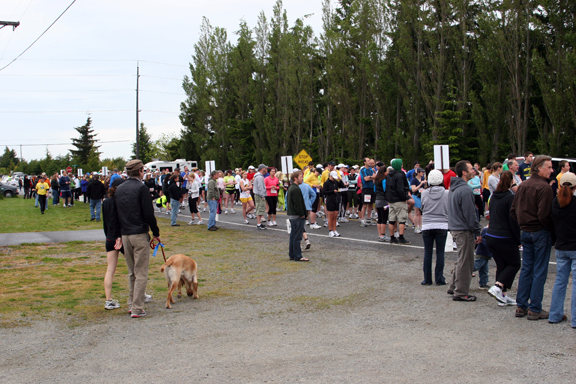 Mile 1 went by fast as it always does. I was right on target pace, and I felt great.

Mile 2 went by even faster. I think it had some downhill, but after that mile, I was thinking “Too fast!” However, I was still feeling great and gave my personal paparazzi a smile. Note the runners around me look pretty happy, too. The woman in the orange ended up finishing the race right behind me. Apparently she paced off me for much of it. I actually paced off the girl in the pink for about half the race. I had no idea someone else was using me as well. 😉 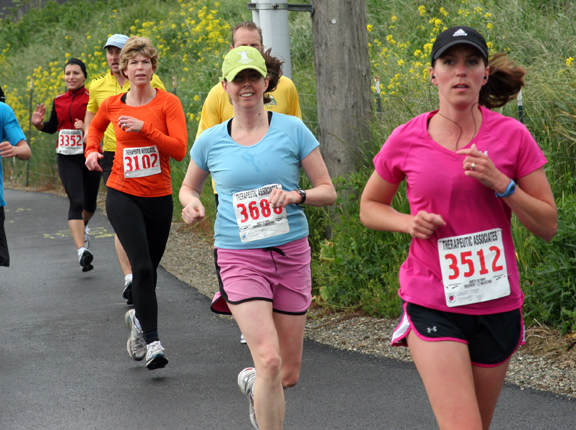 Around mile 3, I started feeling really hot. I think the temperature was around 60, but it was unbelievably humid, and for some reason, I was just roasting. I’d worn a hat to block the rain, but my face just felt like it was on fire. I have no idea why. Other people were complaining about the temperature as well. Part of it is just that most of us have been training in cool, not-to-humid conditions.

I’m starting to get tired in the next shot, taken at about the end of mile 3. What I find interesting is how unhappy the girls in front of me look. I never saw their faces, and I just assumed I was the only one starting to feel like s*** so early in the race. 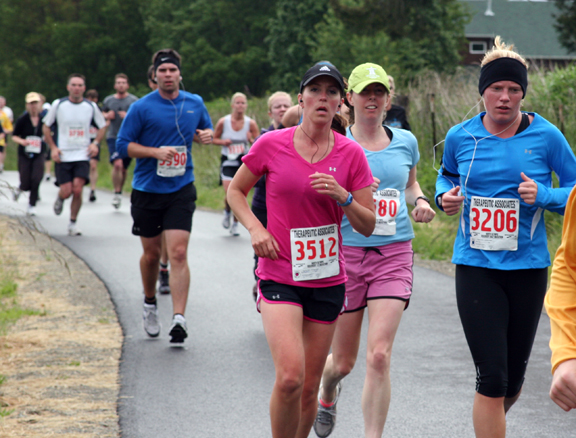 I started getting pretty unhappy around mile 4 or 5. A huge factor in this was the lack of mile markers for these miles. Twelve and a half minutes after starting mile 3, I looked down an my watch and realized I’d clearly finished that mile. This was really discouraging, because I like to be able to check my pace, and I also had no ideas if mile markers would show up again. Miles 4, 5, 6 and 7 were pretty hellish. They were hilly, hot and really early in the race. I was starting to feel bad, and wondering if I was going to make it given I still had 8 to 10 miles left. 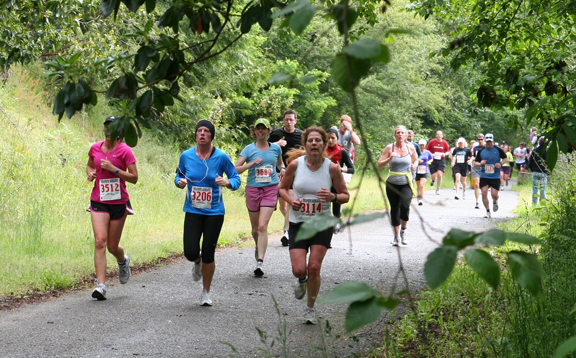 After 7, I started feeling a lot better. Miles 3 through 7.5 had been advertised as the hilly, hard miles, and so with that down, I figured I could handle flat ground. I started feeling a lot less hot, and I ditched the hat, which cooled my head off. You can’t exactly tell I’m feeling better from this pic B took of me after mile 8: 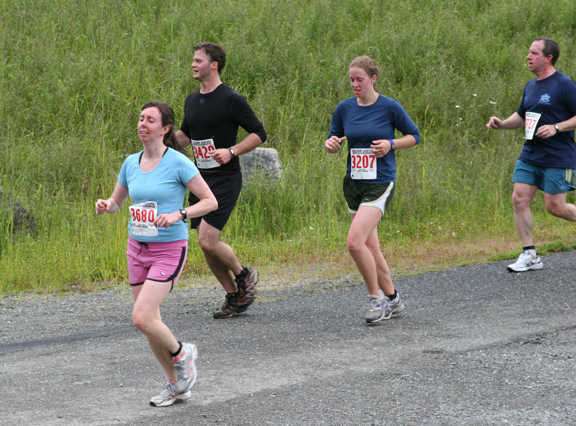 Miles 9, 10 and 11 went by fairly well. The course was flat and I was starting to count down the miles. I wasn’t feeling totally awful, and we emerged from the woods to a beautiful view of the bay. To be honest, I could have cared less about the view, but at least the course was flat. 😉 At this point, I started walking a few steps at the water stops so could re-hydrate a bit. The rest seemed to help. People were really starting to thin out, so I tried to keep up with the person in front of me. I find it helpful to pace off someone else and just try to let them pull me along. 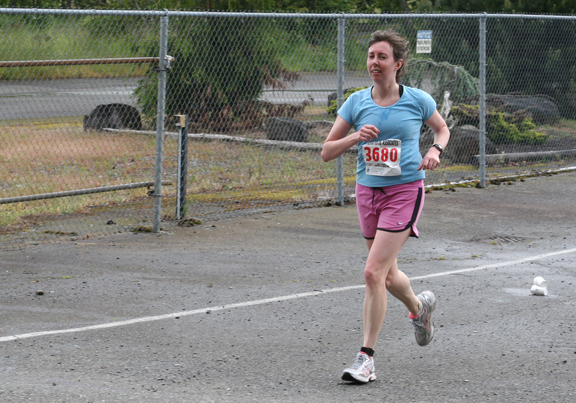 The twelfth mile sucked as the paved path turned into mud / gravel with small rocks sticking up throughout. I’m not a big fan of running on gravel at the best of times, and when I’m completely exhausted 11 miles into a half marathon, I’m definitely not a fan of gravel. I felt I slowed down a bit on this mile, but mostly I think others around me were speeding up. I was starting to check my watch compulsively at this point to count down the time until this little run was over.

The last mile, I realized that my feet were killing me. After the race, I discovered I had a dozen nasty blisters. I forgot about them quickly enough though, and counted my steps to the finish. About 0.1 miles short of the finish, I realized I might be able to break 1:53. I don’t think I did based on my gun time, but I haven’t gotten the chip time yet, so we’ll see. (See above – didn’t make it.) 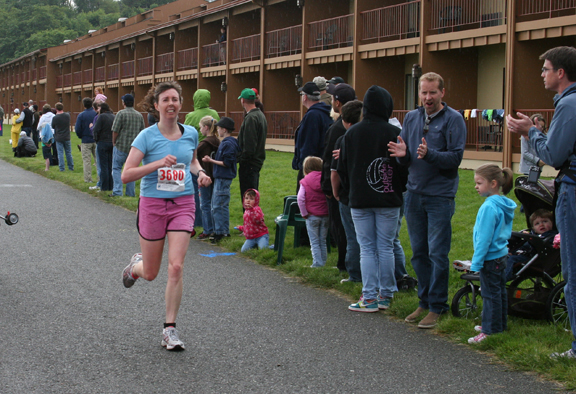 So happy to be done! 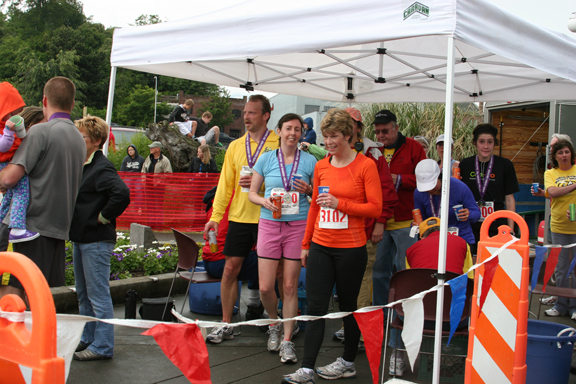