B got her MMR shot a few days ago.  I’m really hoping she doesn’t have a reaction to the vaccine.  L had a likely vaccine reaction that was rather scary.  Of course, L ran a fever after all her vaccines.  I used to schedule them on Fridays because I knew I’d be pulling an all-nighter afterwards.  B, on the other hand, has had little or no reaction to her vaccines thus far.  Only about 5 to 10% of kids have a reaction to MMR featuring a fever of 103 and sometimes a rash, as L experienced.  So, unless there’s a genetic component, it seems unlikely that B will be in that minority.

I have to say that I disagree with the recent California vaccine law.  Parents are no longer allowed to opt out of vaccines for any non-medical reason if they wish to send their child to day-care or school.  Since most families cannot afford a full-time stay-at-home parent, this is tantamount of requiring children be vaccinated, full stop.  While I think vaccination is an important public health issue, I also support personal freedom, and I think laws should strike a balance between the two.

Here are some facts to contemplate . . .

1.) The MMR vaccination rate has been constant or increasing in the US at 92 to 93% for the last twenty years.

2.) The rate of vaccination required to eradicate the measles eventually is thought to be somewhere in the high 80s.

3.) There has been one measles death in the last decade.  There were something like 20 pertussis deaths in the last major outbreak.  In contrast, consider other preventable deaths.  30,000 deaths annually due to gun violence.  2300 deaths annually due to SIDS.  (And yes, SIDS, while not 100% preventable, can be very much reduced by proper attention to sleep safety.  I would venture a guess than less than 10% of parents follow all sleep safety guidelines.)

4.) Measles outbreaks and pertussis outbreaks are not solely or even primarily driven by unvaccinated children.  Germany, for example, had a much more severe measles outbreak than we did, and they vaccinate 98% of their kids.  Undervaccinated adults (those who were not vaccinated, or received only one dose of the measles vaccine as used to be recommended) are a major driver as well.  Undervaccinated kids and adults (as opposed to unvaccinated) also tend to drive the pertussis outbreaks.  In other words, instead of forcing people who do not wish to vaccinate to do so, we could educate and encourage those who do vaccinate to stay up-to-date on their vaccines, and take measures to get teens and adults to vaccinate themselves against pertussis.

Except that I can.

WDBJ7 is my parents’ hometown station, as I think they call it.  They watch the evening news on that station (a Roanoke station).  As a result, today’s shooting hit’s a little closer to home for me than most.

We’ll soon find out the why, I imagine.  Was the shooter a racist?  Merely a disgruntled former employee with a bone to pick?  A misfit?  Mentally ill?  Does it really matter?  What matters is that he woke up in a bad mood and went and shot some people.  Innocent, young people.

At some point, will people say enough is enough?  I live in one of the more liberal parts of one of the more liberal states, but legislators here will not legislate on gun control for fear of the wrath of the IRA.  This would not surprise me in Texas, but here in Washington, even when the people overwhelmingly favor gun restrictions, lawmakers will not pass them.  We do have laws anyway, however, thanks to the citizen initiative process.  Write a law, connect enough signatures, and it goes on the ballot.  It’s how a recent background check law was passed that fixed the gun show loophole.

If you think that it’s not okay for random people to go around shooting men, women and children, put your money where your mouth is.  The anti-gun lobby is completely disorganized and weak compared to the NRA, but with money, that can change.  H and I donate to the Washington Alliance for Gun Responsibility.  Look up your own local organization and give them some ammunition against the NRA.  Our nation should not be held hostage by a wealthy fringe group.

I never call L “princess.”  This blogger is a tad defensive about her decision to use the moniker.  As for me, I’ve never had to resist the urge to call L princess or had a slip of the tongue.  There are a couple of reasons for this.  First and foremost, we don’t watch TV.  Specifically, we don’t watch Disney.  Shockingly enough, there are very few occasions in normal 3-year-old life in which the royals, past present fictional or real, pop up.  L doesn’t really know what a princess is.  I think she asked me once, and I had a hard time explaining it.  I think the problem with princesses today are that they are aligned with the Disney ad machine.  Disney’s movies, videos, games and especially ads are designed with big bucks to entice small children.  I think it’s worth sheltering my small child.

Ug, I could really go on a Disney rant here.  Why is it that the only toy store in the mall is a Disney store?  Why does every Disney movie, whether the princess be strong or heroic or pathetic, end with a kiss?  And such an enticing kiss!  Why do all Disney characters have eyes as large as their waists?  Even when they decide to feature a rare plump character, the eyes are obscenely large.  Why was the actress who played Cinderella packed into such a small, shape-deforming corset that she was unable to eat while in costume?  Let’s not forget this actress had an incredible figure to start with.

In the second place, the English royals have a long history of rather nasty behavior towards the Irish.

I’ve started on my next quilt.  This one is intended to be a wedding present for a friend of mine.  It’s going a rather slowly so far.  After five attempts, I finished my first foundation paper pieced block: 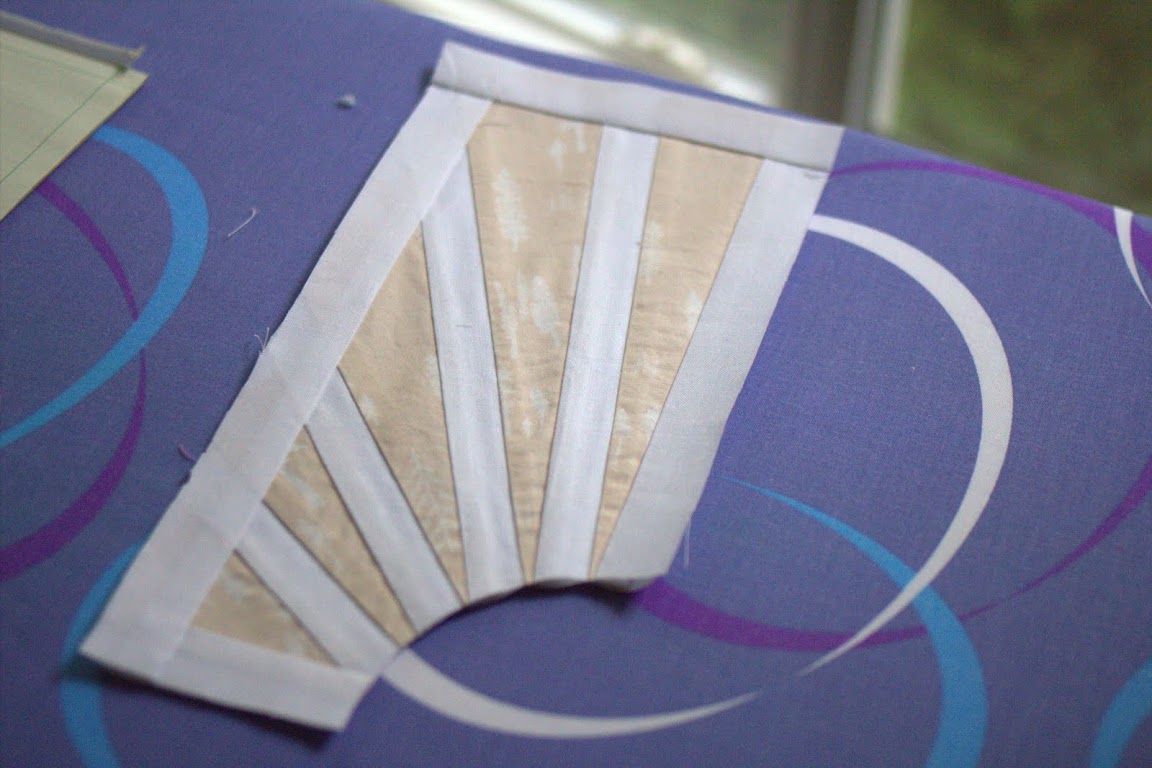 It wasn’t hard, per se, but the approach is very intolerant of mistakes.  I have not had a chance to ask Google if there is in fact a way to fix mistakes.  In any event, I need twenty-four of these, and they’re taking at least an hour apiece. 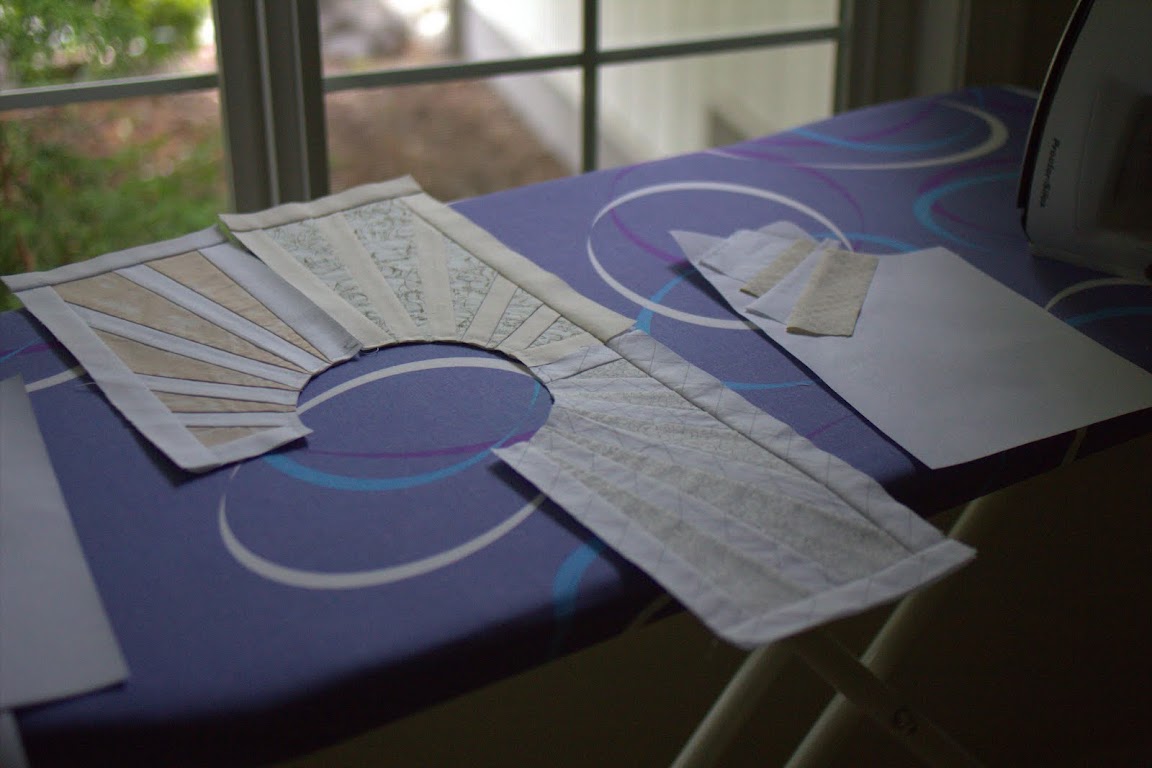 I may decide to make the quilt smaller than originally planned.

The design is from Friedlander’s Savor Each Stitch.

Of all the quilting books I’ve looked at this year so far, my favorite has unquestionably been The Improv Handbook for Modern Quilters.  I’ve discovered I like quilting books with lots of text and philosophizing on sewing and life, and this book definitely has that aplenty.  The book has several “scores” for making improv quilts, and floating squares is the first.  You can see a whole bunch of quilts people made using this score here.  I gave it a go over the last couple of weeks, and I’m pretty happy with the result, especially given the level of effort.  It was a quick and easy quilt and small, so a refreshing change from the last two quilts. 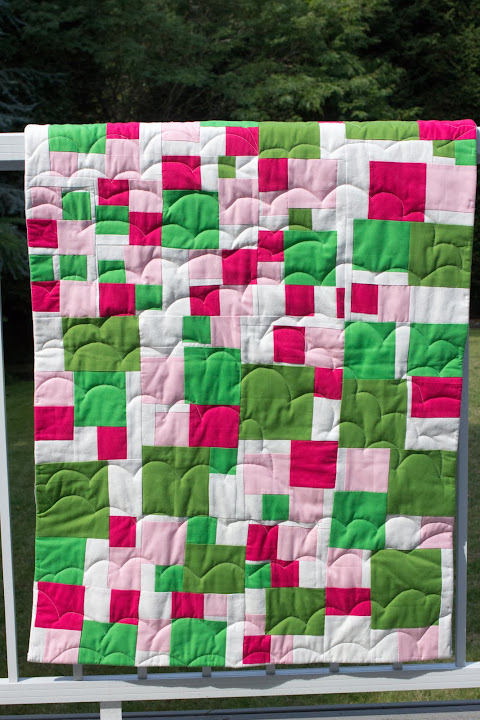 This is quilt number three using either sunrise or sunset Kona solids.  This quilt uses a few fabrics from the sunrise fat quarter bundle which I accidentally ordered when trying to purchase a jelly roll for my previous quilts.  Hopefully it will get put to good use.

I also used some of the same white linen blend I used on my last quilt.

Essex in Linen by Robert Kaufman

Crosshatch in Grey by Carolyn Friedlander 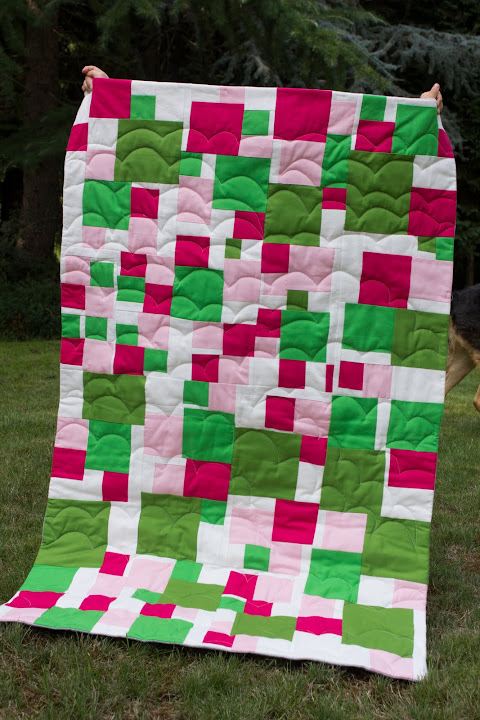 I used Hobbs Tuscany Cotton Wool Blend batting.  It’s an 80/20 wool / cotton blend.  It’s quite lightweight, and considerably thinner than the 100% wool batting I’ve used in past.  I decided to double it for extra loft, a decision I definitely rued when I was trying to quilt it and could barely move it under my needle.  Nevertheless, I did love the drape and loft of the quilt when it was finished. 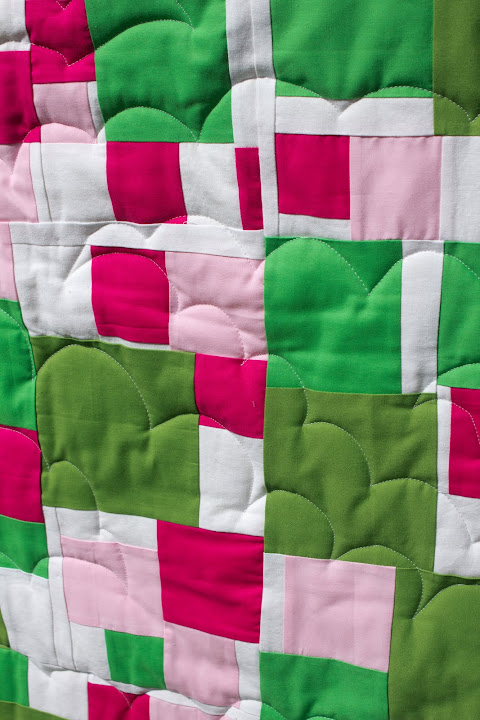 The book recommended using a light gray colored thread to blend with all different colors when quilting.  I tried the Dove shade above, and indeed, it did seem to blend pretty well against the white as well as the darker shades. 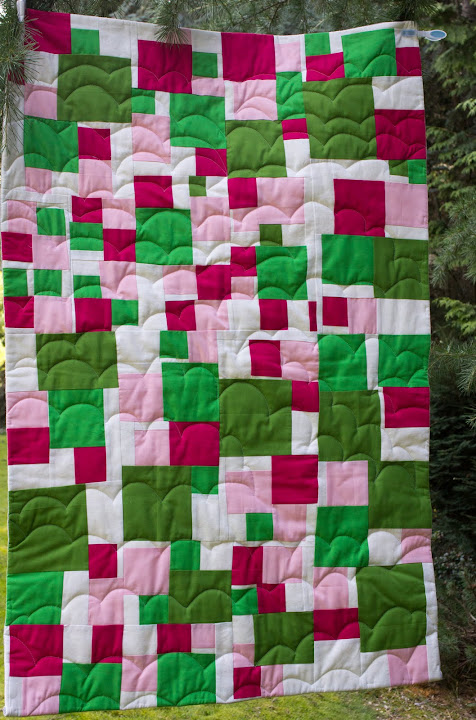 I used the same fabric as I used on the back of the quilt for the binding.  I used a method described in the book to make the binding invisible from the front.  This is not the same as not using a binding at all, and I think it’s actually quite a bit easier, but you have the disadvantage of the binding being visible on the back.  However, using the same fabric as the backing, it’s not very visible.  Also, I envision this quilt as a wall-hanging. 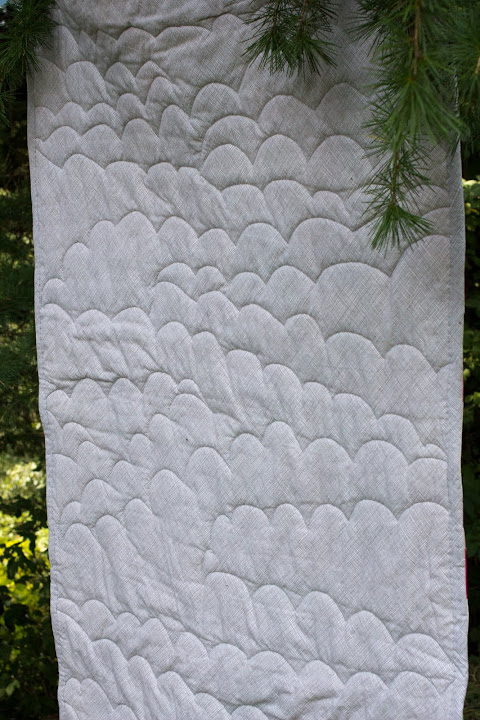 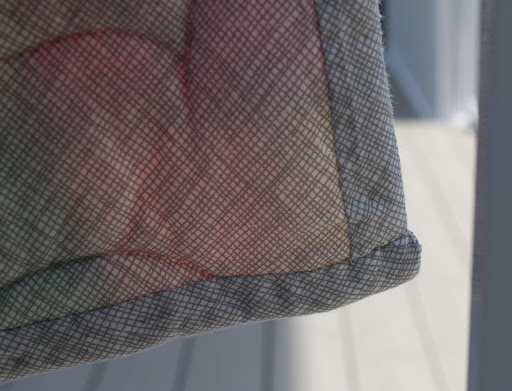 You can buy this quilt in my Etsy shop.

The Kona Sunrise quilt that I’ve been working on is finally complete and ready to be shipped.  It’s roughly standard twin quilt size – 65″ by 88″, and should be more than large enough for its 3-year-old owner.

Essex in Linen by Robert Kaufman  I loved this fabric!  It’s a 55% / 45% linen/cotton blend, and it had a lot more texture than 100% cotton fabric while still being easy to work with.  I will definitely be incorporating fabric from this line into my future quilts.

Select is Quilter’s Dream’s mid-weight cotton batting.  I prefer a bit more loft and definition in the quilting than the lightest weight batting (select) provides.  The one disadvantage of this batting is that it is rather heavy which adds to the challenge of quilting.

As usual, I did a double fold binding and hand-sewed it to the back.  I find the process of hand-sewing the binding relaxing and enjoyable, except of course when I prick myself.

L poses with the quilt for scale.