H’s mother has been asking for some artwork from L.  We’ve been really into painting lately.   Until recently, we’d stuck to the Crayola washable finger paints.  They really are fairly easily washable, and L can now get the paint out of the bottle herself.  She usually ends up with a big brown / gray / black blob in the middle of her paper, though, which I haven’t really felt like saving or sending to relatives.  L also enjoys the paint-with-water.  We’ve tried the traditional kind where the paint is actually on the page, like this, and she has a lot of fun with it, but again, the result is not really anything to write home about.  Recently, we tried this version of paint with water.  Basically the paints are at the top of the page, and for a three-year-old, I liked it a lot better.  L had a lot of fun with it (though I fell short trying to answer her why questions regarding the paint attached to the top of the page), and the results were actually really pretty, as much as rainbow painted cars, trucks and automobiles can be.  (On a side note, my appreciation for Melissa and Doug toys has been increasing as L ages – no Disney characters, basic, fun toys of every description, and more affordable than its Hape / Haba cousins.)

Inspired by the paint with water, I decided to buy L some water colors, and I think the water colors are much more forgiving than the finger paint.  I’ve even sat down myself and done some painting with her.  I decided we’d try and make some simple coasters for my MIL.  I just cut some seven inch squares of white fabric and gave them to L and let her have at it.  Then I cut some five inch squares of white fabric and some wool batting.  (In retrospect, I wish I’d used lower loft batting, but wool was what I had on hand.)  Once the paint had dried, I just layered the three together with the five inch squares centered on the seven inch squares.  I folded the seven inch edges over twice in half inch widths, and then just stitched the whole thing together.  I do think the result is quite cute considering the age of the artist and the low effort involved. 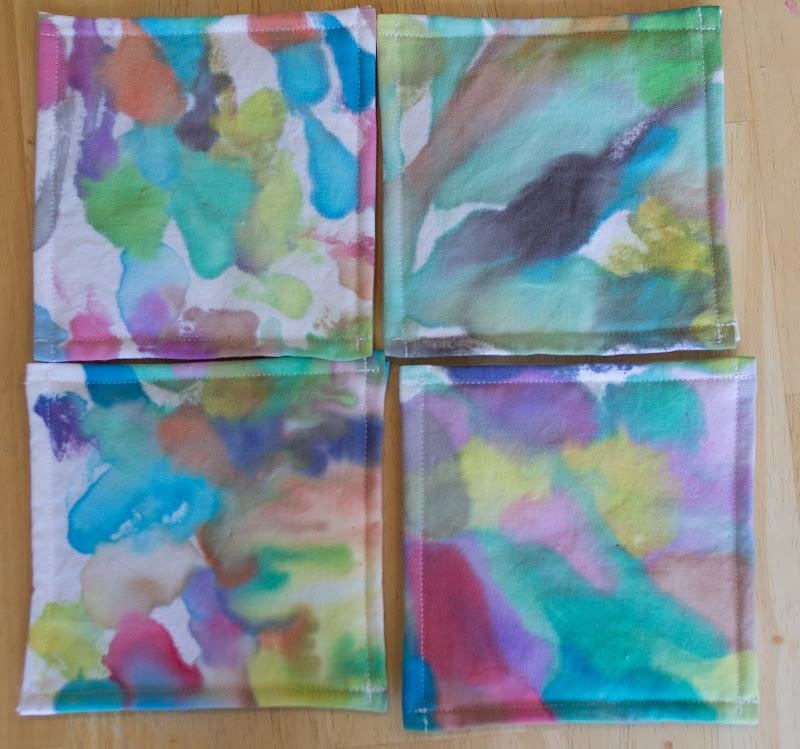 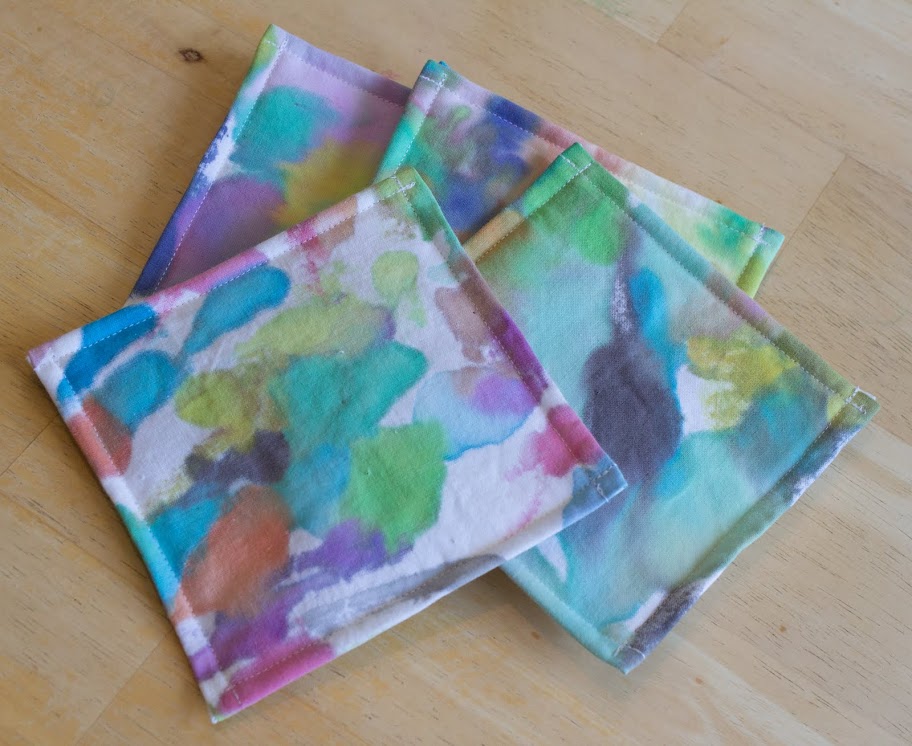 L was very pleased with them and doesn’t want to send them to Nana.  Too bad!  Off they go.  I feel I really should quilt them somehow, but I guess we’ll try that on version two.  The idea is that they could theoretically be used as coasters, but that may be incompatible with watercolor paint.  Fortunately, I think Nana is not a very though critic when it comes to her granddaughter’s art.

One thought on “watercolor coasters”