We went to see preschool #6 this morning.  Yes, #6.  Let’s review.  We loved preschool #1.  They had a lottery last week, and I have not heard anything which I think is a Very Bad Sign.  Preschool #2 was great, but we decided it was too expensive at $12,000 per year for age three. (The application deadline has now passed.) I was not impressed with Preschools #3 and #4.  Preschool #5 was great, and we are number 5 on the waiting list; it’s unlikely we’ll get in.

Preschool #6 is an entirely outdoor preschool based on a farm about twenty-five minutes from where we live.  That distance is the reason it hasn’t been high on my list.  Well, we really liked it.  The farm itself was small but cute and featured a very fat turkey, ducks and a variety of unusual  chickens wandering around as well as two pigs.  There may have been other animals as well that I did not see.  After some twenty minutes of milling around, we set off on a tour of the property.  For those keeping track, it’s now been an hour since we left home and nearly an hour and half since I last nursed B.  Note that I do not pump and babies need to be fed every two to three hours.  Off we went, anyway.  On our traverse of the property, we stopped to roast vegan marshmallows on an open fire – I kid you not.  Then onto walking on a giant fallen log.  L, unlike the other kids, declined to either roast a mallow or walk on the log, though she was willing to eat a marshmallow H roasted for her.  We stopped at a slowly moving river.  We continued onwards with a couple more river stops, and a foray on the shore during which buckets were distributed to all the kids so that they might build sand castles.  We also stopped at their gardening spot, where the preschoolers and teachers apparently grow vegetables.  It was quite impressive.  The spot is truly lovely.  (I have to say, though, that the forty minute walking tour, which left me with no idea how to get back to the car, was a bit much.  B was very cranky by the time we were done, and I was ready to hit the road.)  The problem is that the twenty-five minute drive was over quite a long distance featuring high traffic freeway driving.  So, we shall see.  I’d love to send L here, but I’m not sure spending hours in the car every week is a good choice.

L’s party went very well, but she was not so sure about blowing out the candles: 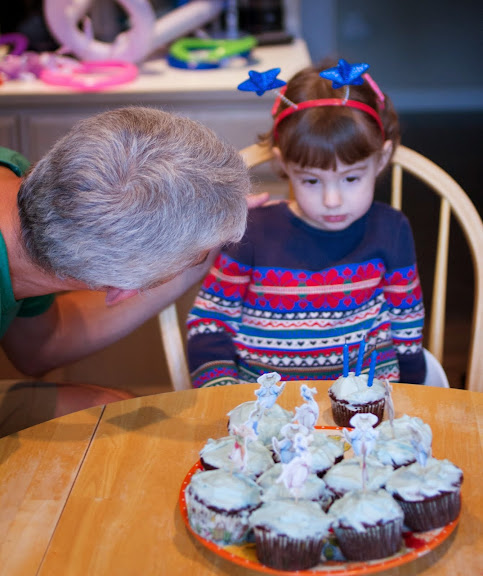 B is six months old as of a couple of days ago.  We will start solids as soon as I can find some rice cereal to feed her.  Also, our high chair is on back order, something I was unaware of when I ordered it.  (Our old Ikea one turned out not to be quite as good a deal as I previously thought when the paint began to come off all over its occupant.)